This book review by Paul Morris was first published in the Spring 2020 issue of US-China Review, the journal of the US China People’s Friendship Association (USCPFA) and we are grateful to Paul for his permission to reproduce it here. Paul is Production Co-ordinator of US-China Review; he is also a SACU member.

A foreign father given up for dead, an unwed mother struggling to make ends meet, a reunion with a long-lost daughter from abroad. Add a handful of prominent China hands who show up at key junctures and you have the plot for an international, intergenerational family drama. This story of 20th century Britain and China comes to us from Zoë Reed, now head of the U.K. friendship association, the Society for Anglo-Chinese Understanding (SACU). Her wide-ranging memoir illuminates the history of British-Chinese relations as she recounts the connections among her father, her mother, and notables such as Joseph Needham and Rewi Alley.

The book, A Bridge Between Hearts: Anglo-Chinese Friendship and Understanding, contains a substantial autobiography by her Chinese father, an account of her English mother’s life, and her own story of connecting with her Chinese roots and working in the China friendship movement. Published in Beijing, it is bilingual.

The author’s father won a scholarship to study industrial engineering in Britain in 1946, and met the author’s mother in London through the circle of Joseph Needham, the scholar of Chinese science and technology. Their relationship ended in 1950 when K.C. Sun, the student, returned to China. The author’s mother, Susan Eunice Reed, had not told him she was pregnant with their child.

After years of believing that her Chinese father was dead, Zoë discovered that he was living in Lanzhou, Gansu province, and with considerable effort managed to reunite with him and his Chinese family. China during the war with Japan is where K.C. Sun’s story began, in a farm family living near Kaifeng, Henan. In a battle with the Japanese in 1937 the Nationalist army dynamited dikes to stop the advancing enemy, flooding large tracts and making refugees of Sun and his family. He was unfortunate in being left in an orphanage near Xi’an, but fortunate in eventually finding a spot in the Bailie Schools, a series of progressive schools set up by New Zealander Rewi Alley.

In the Bailie School near Baoji, Shaanxi, he received academic and technical training and met other left-leaning foreigners, such as George Hogg, who were involved in the Chinese Industrial Cooperative movement. After a move to a Bailie school near Lanzhou, Sun had the chance to accompany Joseph Needham and Rewi Alley on a 1943 expedition to Dunhuang in the northwest of Gansu province. “Meeting Dr. Needham as well as Mr. Alley would affect the rest of my life in ways I could not predict,” he wrote. Needham’s photographs documented the adventure. 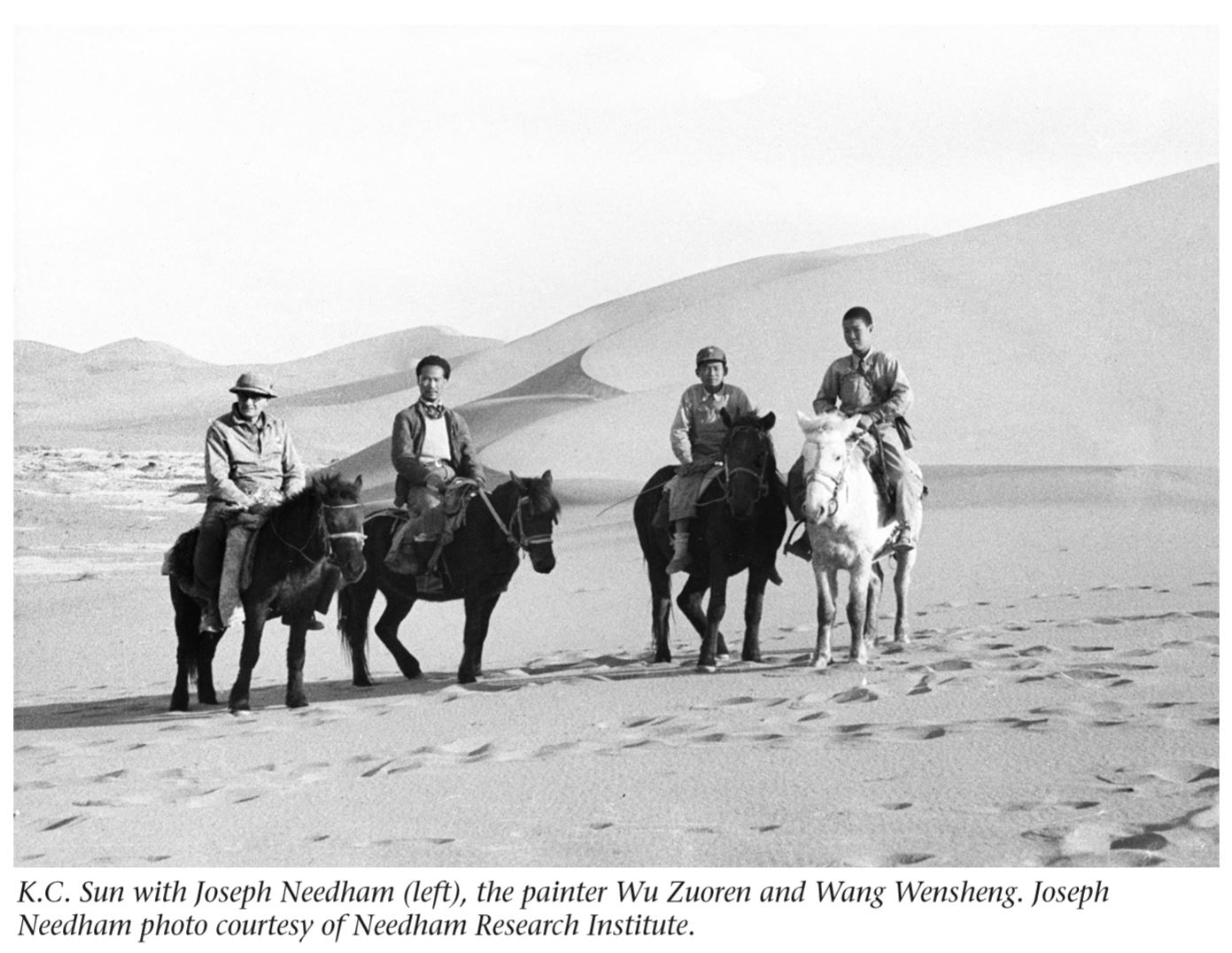 One memory from the Bailie school in Lanzhou is of gardens that featured apple trees that were a gift from U.S. Vice President Henry Wallace. The same vice president presented honeydew melon seeds to the school in 1944, according to a memoir by Charlie Grossman of USCPFA. Sun graduated from his studies in mechanical engineering in 1947 and was picked to go to Britain for further training, with the sponsorship of Needham and the charity British United Aid to China. In Britain he gained technical experience in the textile industries in Nottingham and North Wales. During a three-year stay he met and had a relationship with the student Susan Reed, who had an interest in China because of connections with Joseph Needham. She helped introduce him to British life, including concerts by Paul Robeson in London and walks in urban parks. 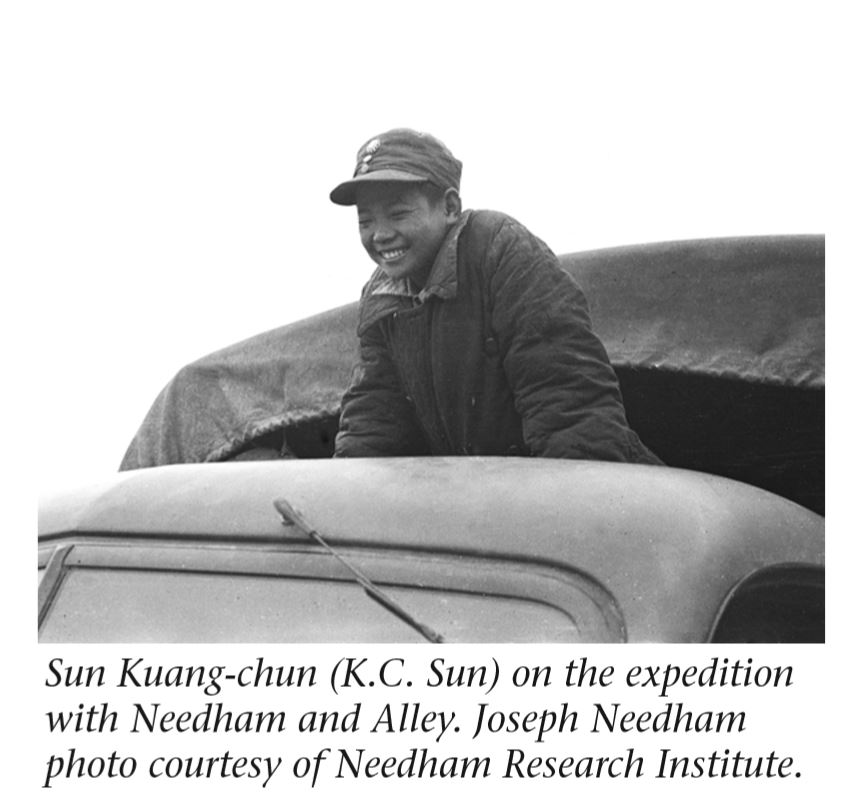 One touching story from 1949 told of K.C.’s invitation to speak to a Women’s Federation group on the new Chinese government. “I told Susan, ‘They want me talk about Chinese Communist, so she read a book, which was called Red Star Over China. Eventually she did a very well speech and typed it down for me. When I got to the meeting, I just read it. Since then, we meet each other more and more, I really admire her very much.” 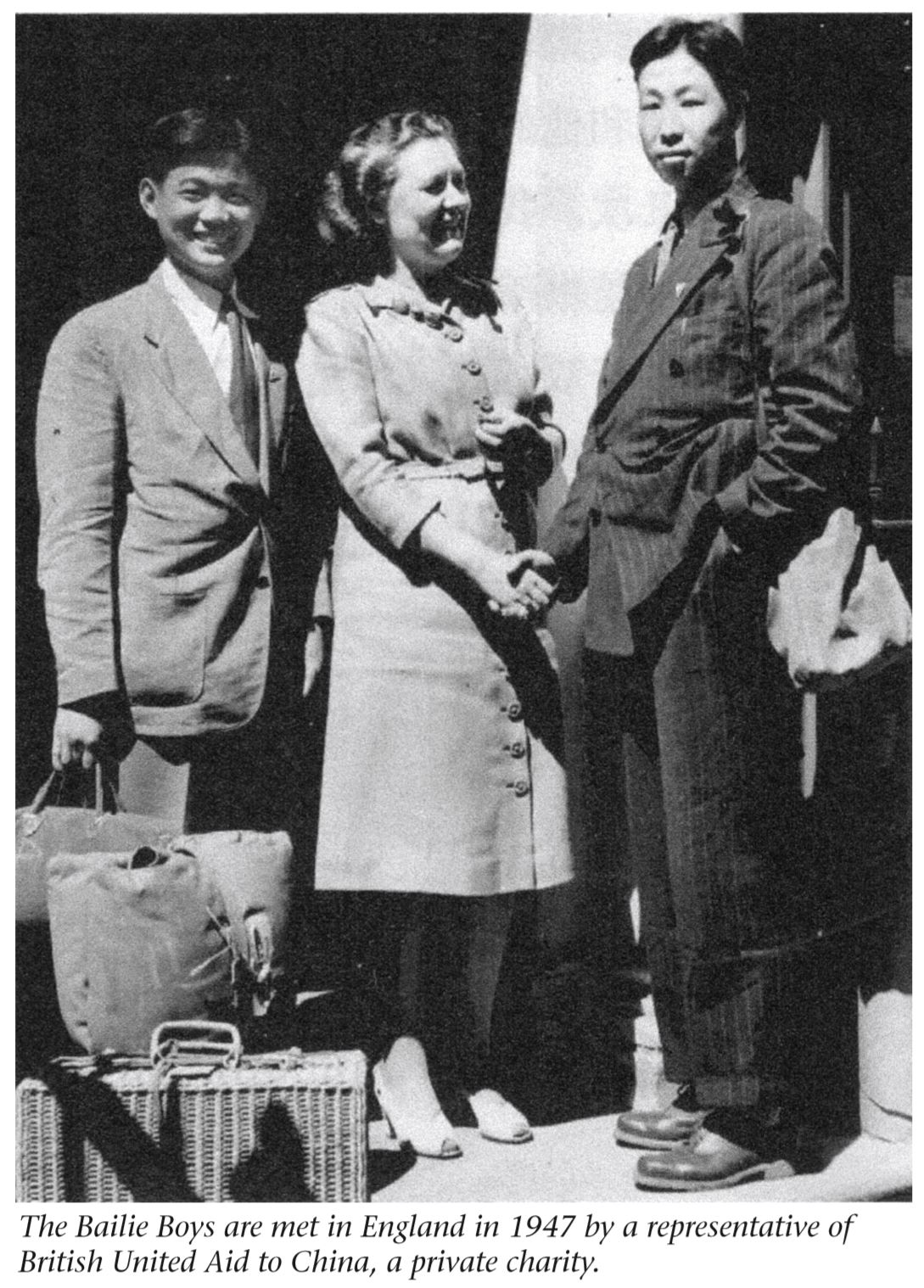 The second part of the book is Eunice (as she later called herself) Reed’s story, also something of an international adventure that began in Nyasaland (today’s Malawi) where her parents were in the retail trade. As a student back in England she encountered the Needham family through the Cooperative College near Nottingham. When, after K.C.’s departure for China, she needed help as a single mother, she turned to Needham, who made some attempts to find work for her. She had decided to abandon any hope of reconnecting with the father of her daughter Zoë.

After a career in nursing, Eunice circled around to connect anew with Joseph Needham. In his last years in the 1990s she worked as his caretaker in Cambridge. While Zoë was growing up she made several important contacts in the Anglo-Chinese community. One contact eventually led to her father, still living in Lanzhou. Though her mother declined to participate, Zoë journeyed to China and made a strong connection with her father and his extended family. Her description of the growing bonds with her Chinese family is sensitive and affecting, as is her treatment of her mother’s often difficult times. She writes of her youth, when her father was never spoken of, and her need to answer the question, “Where are you from?” She comments, “I felt a fraud to claim being half Chinese when I couldn’t then point to any relations from China.”

After 1999 she was able to learn much of her Chinese heritage during visits to her family. Zoë Reed is currently a medical administrator in London and since 2009 has been Chair of SACU. This major volunteer contribution demonstrates her commitment to building understanding between China and the U.K. As leader of a SACU tour group in 2013 she retraced the trip her father had made with Joseph Needham in 1943, visiting the Bailie School and Dunhuang. In her description of SACU’s history she mentions a detail that will be familiar to USCPFA members: “It had thousands of members in its early days and was the only route to China in the 1970s.” This was the result of a Chinese policy that in the early years of travel gave visas to politically friendly organizations. SACU is now a smaller volunteer organization with regular events in London and several other cities. 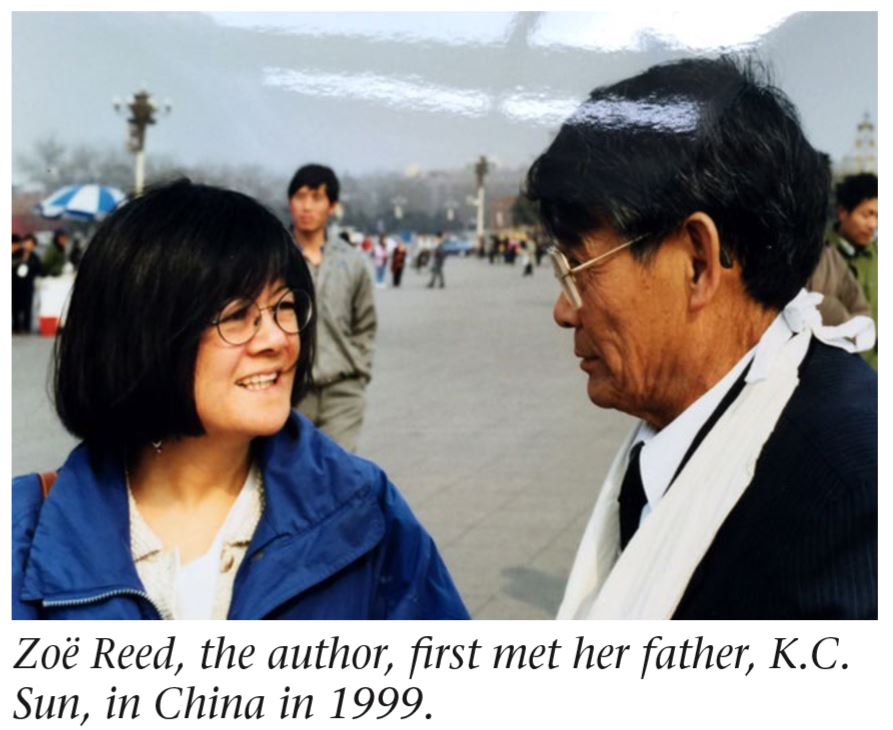 A Bridge between Hearts: Anglo-Chinese Friendship and Understanding by Zoë K. Reed,
Beijing Publishing House, 2016, 256 pages in English with Chinese translation.
ISBN 978-7-200-12351-7.
This very worthwhile family memoir is available from Amazon in the U.K. and Cypress Books