A book review by Dirk Nimmegeers.

Dirk is a member the Belgium-China Friendship Association and also of SACU. He edits the website ChinaSquare.be a Dutch language website which covers news and comments on developments in China.

Peter Nolan realizes the danger of a lengthy and fierce battle between the West and China, which may cause enormous material and human damage. One way to avoid that disaster is to ensure that China and the West get to know and understand each other better.

According to the authoritative Cambridge professor, many Chinese, and certainly the prominent persons among them, know more about Western history and current events than Westerners know or want to know about China. Nolan hopes to change that.

Two civilizations
China and the West: Crossroads of Civilisation consists of three parts. First Nolan compares the routes that the West and China have travelled in the last 3000 years. He then explains that capitalist globalization is a two-edged sword, with both very reasonable and extremely unreasonable elements. The last and by far the largest part of the book deals with the Communist Party of China, its role and how it views parliamentary democracy. According to Nolan, many differences between the West and China go back to what he calls the Ancien Régime. During that era prior to the revolution, which ended in Europe with the 18th century, in China with the 19th century, those two great civilizations had a totally divergent, almost opposite character.

Two evolutions
The author perceives long periods in which they become similar and grow together. Those eras are interspersed with centuries in which both were evolving in a completely different way and getting alienated from each other. In every age, various ways of thinking and acting were formed in the two regions and that has continued to the current date. Nolan discusses the fields that matter in the relationship between the two entities. He gives his views on their ideas concerning the following topics: unity or division, politics, expansion, balance between sections of the population and ethnic communities, religion, militarism, innovation, nationalism and communism. The way China looks at the West today is largely determined by what the Chinese know and have experienced from Europe and the United States over the course of history. Much of this is still seen to exist, shaping Chinese perceptions today. For instance, the inclination of the West to use violence for serving its interests and to impose its values on other continents.

Division & conflict vs. Unity & harmony
After centuries in which the Roman Empire and the Chinese Empire had been growing into vast unified universes, the former disintegrated while the latter remained largely united and stable. In Europe and in the large parts of the world that it took over, murderous internal and external confrontations often prevailed. The latter include hundreds of years of territorial expansion and looting – colonialism – which have resulted in bloody wars against independence movements and neo-colonialism. In China, soldiers, such as the ones we are familiar with from the terracotta army, played only a marginal role after the Han Dynasty (ended in 220 of our era). They fell primarily under the authority of the civil service, just like the People’s Army today obeys the CPC.

According to the author, the Chinese view the conflictual course of the West with a mixture of wonder, disgust and a certain anxiety. For centuries, China had a strong appetite for hierarchy, stability, but especially for harmony. These differences explain the current geopolitical contradiction between the leading nations of the West and China: zero-sum versus positive-sum, also called win-win.

Market and bureaucracy
For centuries, and many readers may be surprised at this, another constant in China was the role of market which was regulated by the state. The market ensured economic development and prosperity for large sections of the population. The Confucian civil servants were selected for merit and for the will to serve the interests of the population. Harmony here too: the balance between the market with its healthy (energizing) competition and regulation by the state apparatus, intended to curb excesses of the market. Harmony and dynamic competition did not exclude each other, but rather complemented each other.

Maoist interlude
The hostility to the market among the Maoists and their unilateral emphasis on ideology, on the one hand promoting revolutionary violence and on the other hand displaying a strong aversion to all competition, belonged to a variant of communism, according to Nolan. This was partly prescribed by the Soviet Union, but it was also a reaction against the equally ideologically inspired and violent anti-communism of the West and its allies. During the anti-Japanese resistance and the civil war, Maoism co-existed in the CPC with a tendency that was more focused on improving living conditions. At the same time, the struggle between these two lines flared up regularly.

According to Professor Nolan, Maoism has in fact been determining policy for only two decades. After 1976, the CPC slowly but surely returned to the kind of marriage of convenience between the market and the state that had been typical of Confucian China. Deng Xiaoping and his successors have successfully combined that Confucianism (and other age-old philosophical movements such as Daoism) with their own Chinese brand of Marxism. They have returned to the two-thousand-year-old Chinese road after a “deviation”.

Nolan’s Marxism
That provides food for thought and perhaps for discussion, as does Nolan’s definition of Marxism. The author states that Lenin, Mao and their followers have interpreted Marxism in a selective manner. In a similarly reductive way however, he strongly focuses on Marx’s admiration for the dynamic forces of capitalism. That would even have led Marx to an approval of colonialism, which, after all, ‘would accelerate capitalist development’. Nolan believes he finds the best analysis of Marx’s thinking in the work of Shlomo Avineri. This political scientist believes that Marx saw the communist revolution as a long-term evolutionary process. Understandably the importance that modern-day Chinese Communists attach to class struggle and their suppression of movements that undermine socialism receive rather little attention in Nolan’s book.

New insights and knowledge that has grown dim
The knowledge that Nolan passes on about Confucian harmony, the military domain, the market and bureaucracy in pre-20th century China may enable us to recognize and understand developments in today’s China. These insights will be new to many readers in the West and it is possible that they open eyes to a different view of the country.

However, the author not only provides new insights. He also refreshes old knowledge or points to phenomena that we have grown to take for granted. So that we no longer see how exceptional they are, or must be for the Chinese. The fact that Christianity has dominated the entire European culture from the end of the Roman Empire until well into the 20th century for example. China has not seen a comparable influence and power of religion. The Chinese admire the art treasures this has produced, but fear that other product of religious zeal, the urge to convert. This is something that they detect in the Western pursuit of regime change in other countries.

Parliamentarism
Nolan acknowledges that in European history not all was sorrow and misery. After the Renaissance, the West successfully caught up with China in the technological field until it got abreast of China in 1800, albeit often by adapting original inventions. Nolan also applauds the long undeniable progress from feudalism to parliamentary democracy, noting that the latter is also a very young system in the West, just like the phenomenon of the European nation states is. The author informs us that Chinese leaders and citizens study parliamentarism thoroughly and are affected by its influence, even to a certain extent welcoming it. He then, however, convincingly explains that the doubts of many Chinese people about the suitability of that kind of democracy for their own country are certainly legitimate. A majority of Chinese people still prefer meritocratic bureaucracy over a fully-fledged multi-party system. Because according to them, the current system is more suitable for a country with the size, history and degree of development of China. Moreover, the power of the CPC and the system of government control also offer the best guarantee that politicians and officials will strive at serving the people.

Knowledge or caricature
Peter Nolan recognizes that we live in dangerous times. “If the West and China are unable to cooperate, the outcome will be a disaster for the whole human race. This is a choice of no choice (mei you xuanze de xuanze)”, he says in the introduction. China has changed but Westerners refuse to see it, either because they fear China’s growing economic and military power or out of ideological aversion. We should not be surprised that China is disappointed by the caricatures that cynical and suspicious Westerners make of their political system and policies.

Nolan’s motivation
China fears that Western politicians are preparing the minds of the population for war and are thus heading for a self-fulfilling prophecy. That gives Peter Nolan a sense of urgency motivating him to share with his audience and readers his phenomenal knowledge of China and its relationship with the West. He has experienced for years that in China there is a great interest for his ideas and opinions. With the book China and the West: Crossroads of Civilisation, that will be no different. Hopefully his message will reach a large audience in the West as well. 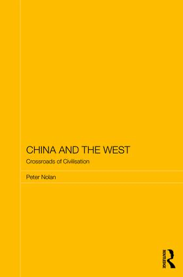