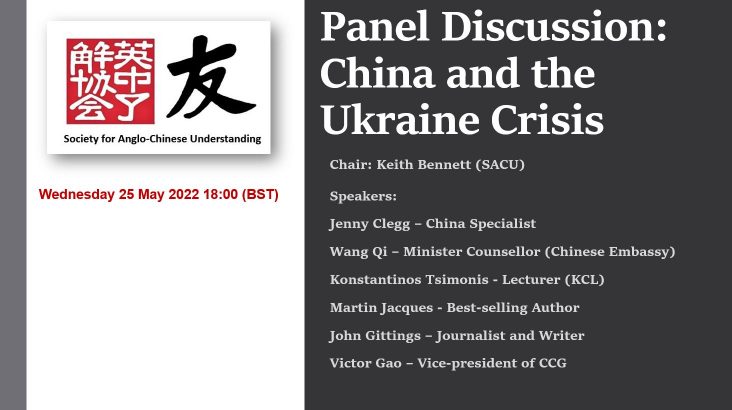 SACU brings together a panel of expert speakers to discuss China’s response and position to the Ukraine Crisis.

Russia’s military intervention in Ukraine is proving catastrophic for Ukraine’s people and also for the wider world. A new era is opening up to be defined not only by the outcome of the war but also by the global response to it. As an emerging world leader, China’s response in particular is crucial.

China has said that the situation ‘is not what it wishes to see’, but in its unwillingness to condemn the Russian invasion, it has been criticised for failing to act responsibly as a global stakeholder. Some even see its commitment to a friendship with Russia ‘without limits’ as dividing the world into bloc politics.

China says it stands for peace and has offered to play the role of mediator although nothing seems to have come of this so far. Nevertheless, China has a tendency to look to the longer term.

To help in understanding China’s role and position in this crisis, SACU has brought together a panel of excellent speakers to explore the various perspectives involved.

Reserve your place on Eventbrite here.

There will be some time for Q&A. You are invited to submit questions in advance to the Event Leader, Arron Van Rompaey: arron@sacu.org.uk

Victor Gao is Vice President of CCG (Centre for China and Globalisation), the Chair Professor of Soochow University, and the Chairman of China Energy Security Institute. He has extensive experience in government, diplomacy, securities regulation, legal, investment banking, PE, corporate management, and media.

Victor was Deng Xiaoping’s English interpreter in the 1980s. He holds a J.D. from Yale Law School, a M.A. in International Relations from the Political Science Department of Yale Graduate School, an M.A. in English from Beijing University of Foreign Studies, and a B.A. in English from Suzhou University, and is a licensed attorney-at-law in the State of New York.

Dr Wang Qi is Minister Counsellor of the Chinese Embassy in the UK. He joined the Ministry of Foreign Affairs of China in 1995 where he worked in the Department of North American and Oceanian Affairs, and in the next 18 years had served alternately and twice at the Department and the Chinese Embassy in the United States. From 2013 to 2019, he worked at the Office of the Foreign Affairs Leading Group of the CPC Central Committee. In 2019, he was assigned to London to take up his current position and first posting in Europe.

Dr Jenny Clegg is an independent writer and researcher, a long time China specialist, and a lifelong member and now a Vice-President of SACU. A former Senior Lecturer in International and Asia Pacific Studies, her published work includes China’s Global Strategy: towards a multipolar world (Pluto Press, 2009) and Fu Manchu and the ‘Yellow Peril’: the making of a racist myth (Trentham Books, 1994). She has published articles in various journals, both academic and non-academic, and has taken part in numerous public events and webinars. She is active in the peace and anti-war movement in Britain.

Martin Jacques is the author of the global best-seller When China Rules the World: the End of the Western World and the Birth of a New Global Order, which was first published in 2009. It has since sold over 350,000 copies and been translated into fifteen languages. The second edition of the book – greatly expanded, revised and updated – was published in 2012.

Martin is a Visiting Professor at Tsinghua University, Beijing, and Fudan University, Shanghai. Until recently, he was a Senior Fellow at the Department of Politics and International Studies, Cambridge University, and was previously a Senior Visiting Research Fellow at IDEAS, a centre for diplomacy and grand strategy at the London School of Economics. He was also a Fellow of the Transatlantic Academy, Washington DC.

John Gittings is a journalist and author who is mainly known for his work on modern China. John first travelled to China with SACU in 1971 and has kept in regular contact with the organisation over many years. After teaching at the University of Westminster, he worked at The Guardian (UK) for twenty years as chief foreign leader-writer and East Asia Editor (1983-2003). He is currently a Research Associate at the China Institute, School of Oriental & African Studies, London University, and an Associate Editor of the Oxford International Encyclopaedia of Peace. His book The Glorious Art of Peace: From the Iliad to Iraq, was published in 2012.

Konstantinos Tsimonis is a Lecturer in Chinese Society at the Lau China Institute, King’s College London. He is a member of the editorial board of the People’s Map of Global China, and of the Advisory Editorial Board of the Journal of the European Association for Chinese Studies. He is also a Senior Research Fellow at the Institute of International Relations (IIR), Athens and a Fellow of the Mediterranean Programme for International Environmental Law and Negotiation (MEPIELAN), Athens.

His books include a monograph titled, The Chinese Communist Youth League: Juniority and Responsiveness in a Party Youth Organization by Amsterdam University Press (Amsterdam: 2021); and Belt and Road: The First Decade by Agenda Publishing (Newcastle: 2022), co-authored with Dr Igor Rogelja (UCL). He is currently working with Dr Fernanda Odilla (Bologna & KCL) on an edited volume titled Corruption and Anti-Corruption Upside Down: New Perspectives from the Global South for the Political Corruption and Governance Series, Palgrave Macmillan. His articles have appeared in Modern China, Europe-Asia Studies, the Chinese Journal of International Politics, the Chinese Journal of Political Science, and the Journal of Youth Studies, among others. His research has been funded by various organisations, including the British Academy and the UN Office on Drugs and Crime.

Keith Bennett is a researcher and consultant on China’s international relations and a long time SACU member.