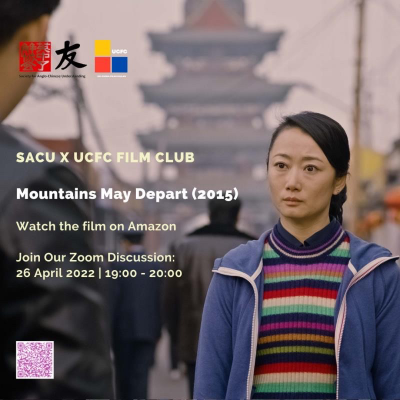 Watch the trailer and rent the video on the BFI Player:
https://player.bfi.org.uk/rentals/film/watch-mountains-may-depart-2015-online

Don’t forget to watch the movie first before coming to the online session: JOIN HERE

Mountains May Depart (2015) is directed by JIA Zhangke (A Touch of Sin, Still Life, The World).

“Jia Zhangke delivers a picture every bit as ambitious, astute and humane as his previous films, covering three time periods in the life of a group of friends who become family. We open on the eve of the new Millennium and Chinese capitalism is burgeoning. Tao must choose a suitor between flashy Zhang, with his fancy motor and stoic worker Liangzi. The film then jumps forward, catching up with the characters 15 and 25 years later.” (BFI)
+ Google Calendar+ iCal Export