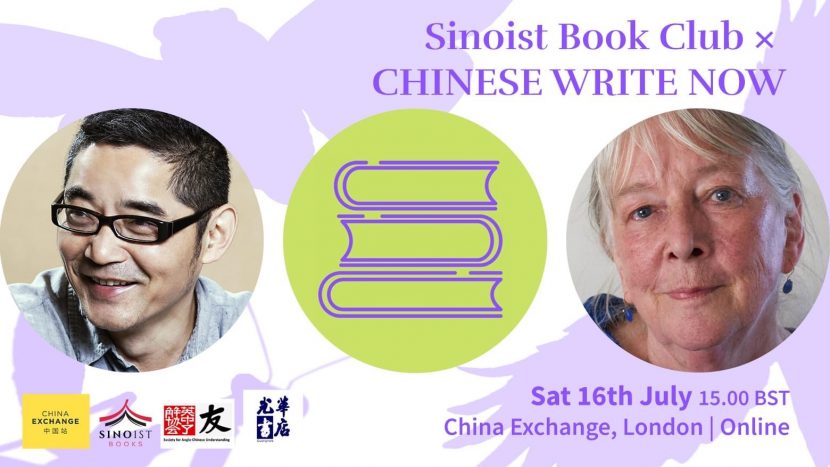 Firstly, I thank Iris Yau丘靜雯, SACU Council member and the event organiser, for encouraging me to share my reflection on attending my first SACU event “Open-Air Cinema: Su Tong in conversation with Dr Frances Wood.”

I knew SACU (Society for Anglo-Chinese Understanding) for a long time, through my line manager Bryan Sitch, Deputy Head of Collections of the Manchester Museum, University of Manchester. We jointly published a research article entitled “An Umbrella of the Chinese Labour Corps in the Manchester Museum Collection” in China Eye in 2018. As we have been working together to develop a permanent Lee Kai Hung Chinese Culture Gallery at our museum, Bryan recently advised me to join SACU to draw inspiration from SACU’s events. How to tell a good story of China is the mission of our Chinese Culture Gallery. Also, I learned that Michael Wood, Professor of Public History at the University of Manchester, is the current President of SACU. From his The Story of China both television series and book, I have been learning more about my own Chinese history, culture, and people from the eyes of a British historian.

Finally, I formally became a member of SACU on 4th July 2022, and I just regretted that I did not join SACU earlier. Meanwhile I was so glad that I joined SACU in time as I was able to join my first SACU event on 16th July 2022, and it was also an event which recalled my childhood wish, though very vague, to be a writer.

This cross-oceanic literary dialogue between the Chinese writer Su Tong 苏童and the British sinologist Dr Frances Wood吴芳思, was jointly held by the Chinese People’s Literature Publishing House and the British Chase Publishing House. Through a video link, these two famous cultural masters discussed the creation of literature, and the translation, introduction, and dissemination of contemporary Chinese literature in the UK.

It was a hybrid event online and onsite organised by Sinoist Books, China Exchange and SACU. I joined on Zoom and soon found out so many pages of audience on my computer screen. Later I learned that the People’s Literature Publishing House had simultaneously broadcast the event, which attracted nearly 30,000 domestic and foreign viewers to watch the live broadcast online in just one hour. On screen I saw a large live audience at the dialogue at China Exchange, Chinatown, London. I wish I could join in-person for my next SACU event.

Dr Frances Wood is a big name for a book worm and a museum professional now focusing on Chinese culture. Whenever I visit the British Library and appreciate its Chinese exhibitions, I am thinking of the driving force and wisdom “behind the scenes”.

Su Tong is one of China’s most acclaimed writers. I learned about Su Tong through watching the films Raise the Red Lantern by director Zhang Yimou, and Rice, both adapted from his books. This SACU event provided me with an opportunity to virtually “see” Su Tong, a successful writer who a very young Chinese girl once had a dream to be.

During the dialogue, Frances expressed her appreciation for Su Tong’s works. From the perspective of British scholars and readers, she asked Su Tong many questions about his works. Su Tong specifically talked about the English version of Open-Air Cinema just published in the UK, because this is the first time that his collection of essays has been translated into English and published overseas. I have not read this book yet, though simply through the title I remembered my childhood experience of enjoying many open-air films in China. In my imagination each essay is like a slide show reflecting fragments of his memory about changes in China.

Also, Su Tong spent much time talking about his long novel Shadow of the Hunter, an English edition of which was published in May 2020. Its translator James Trapp, and editor David Lammie, were also present at the event. This urged me to know more about this novel, and so I searched its Chinese version and was astonished to see its book cover design with the distinctive yellow Winter Jasmine drawing and elegant inscriptions for the book title in Chinese Seal Calligraphy. I thought they are so much like the artworks of my Chinese tutor, Professor Chen Lyusheng. He is a senior art critic, curator, painter, calligrapher, photographer, collector, and a former Deputy Director of the National Museum of China. He is currently the Director of the Centre for Arts and Sciences, and Museums, of the University of Science and Technology of China, and a guest professor in art and museum study for many universities, including Nanjing Art Institute, Shanghai Academy of Fine Arts, the City University of Macau, and Taiwan Normal University. He also has close relationships with cultural institutions in the UK.

I checked with Prof. Lyusheng about this book cover, and he admitted that it was his artwork which had been commissioned by the book publisher, Writer’s Press. He admires SACU’s mission and what we do and would like to collaborate with SACU. Later I attended SACU’s China Connections/Chinese Heritage Working Group meeting on 23rd July 2022, and recommended him to the Working Group for future SACU events such as comparisons of museums and arts between UK and China etc. SACU Working Group members were very interested in him and what he would bring to SACU. I would very much like to make the link between him and SACU, and to help to coordinate potential related events, to make my contribution to SACU as a new but dedicated member.

Shortly after my first SACU event, I was invited to a dinner meeting with some SACU members in Manchester Chinatown where I met Iris Yau (Council Member), Walter Fung (China Eye Editor), Cilla Hollman (Manchester Branch contact), Jenny Clegg (Vice President), Hanxin Yang (President of Xinhua Chinese Association) and Kevan Nelson (Unison Northwest Regional Secretary). Iris gave me a copy of her exhibition document Opium, Silk and the Missionaries in China, Jenny kindly gave some China-related books to us, and Walter brought me several copies of China Eye magazine. All these will be beneficial to my work for the Chinese Culture Gallery. From these SACU members I learned more about SACU, its history, mission, and future.  I was so moved by their long-term passion and dedication to carry out SACU’s mission.

My first SACU event was a good kick start for my future journey with SACU and opened my eyes to a wider vision to promote understanding between the peoples of China and the UK.

Again, thanks to Iris Yau for organising this wonderful event and encouraging me to write down my personal experiences of it. Also, thanks to all other SACU members who helped to make this event so successful. Thanks SACU.

Dr Fang ZONG is currently a Curatorial Research Assistant for the Lee Kai Huang Chinese Culture Gallery at the Manchester Museum, University of Manchester, working on Chinese collection research and gallery content development, and establishing / maintaining relationships with local Chinese communities and museums in China. She graduated from Karolinska Institute, Sweden, with a PhD degree in Medical Sciences, previously worked as researcher in Biomed and Public Health in China, Sweden, and University of Manchester. She has been learning museum practice, Chinese history and culture for many years.