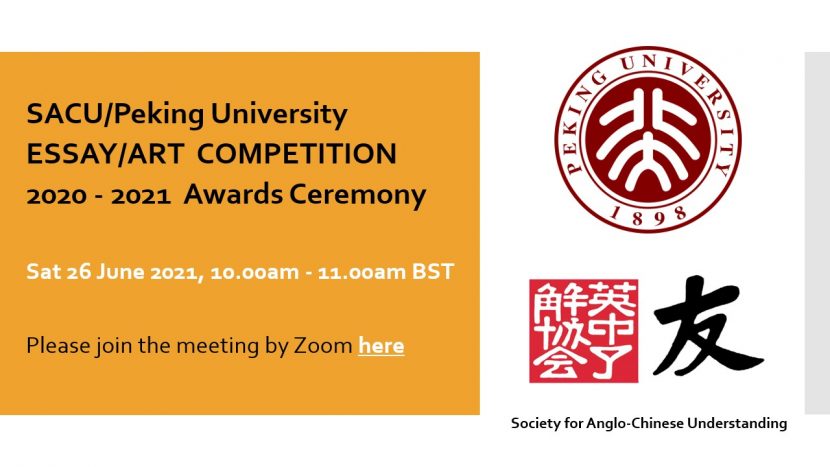 SACU members joined with students from both the UK and China for this year’s Awards Ceremony of the Essay/Art Competition, organised jointly by SACU and Peking University.

The SACU/ Peking University Essay Competition began in 2015 as part of SACU’s 50th Anniversary celebrations. Now in its 5th year, the aim of the competition is to help young people learn about the development of friendship and understanding between the UK and China and to consider how this might be further promoted. The submissions can be an essay or an artistic form, which could involve for example photography, other visual art, or choreographed dance.

The awards are sponsored by Peking University with three prizes of £100 / £50 /£25 in each of two categories.

This year the theme of the competition was ‘How can we achieve a better understanding of China?’

Zoë Reed, Chair SACU, and Dr Wang Fang co-hosted the ceremony. The judging panel was chaired by Dr. Frances Wood, renowned author on China and former head of the British Library Chinese Collections and SACU Vice President. Frances announced the winners of the 12 prizes, and gave the panel’s views on each of the winning entries, commenting that this year’s entries were all of a particularly high standard. Frances had enjoyed reading the essays and was impressed with the maturity and insight of the students’ work. Professor Sun Hua, Director of the China Center for Edgar Snow Studies, Peking University, joined from Beijing and made an address as competition sponsor. Professor Sun Hua is an expert in historical figures who have contributed to building friendship between the peoples of China and the West.

SACU is grateful for the support and sponsorship of Peking University for the Essay Competition.

SACU can also offer talks to schools under the title of ‘China in the World’. Members of our Speakers Bureau are all established writers and speakers on China with many years’ experience of living and working in the Chinese world. It is hoped that these talks on China will enhance the younger generation’s understanding of China. Please email for more information: membership@sacu.org.uk