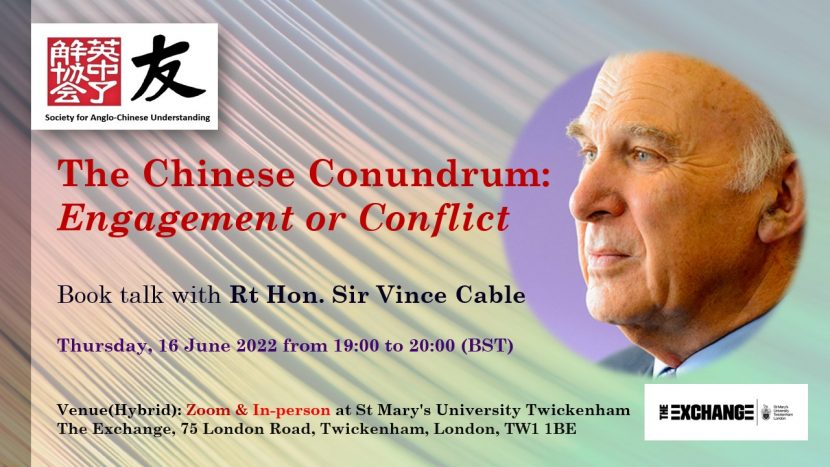 SACU welcomed the Rt Hon Sir Vince Cable for a discussion on his new book, The Chinese Conundrum: Engagement or Conflict.

Fred is currently a Global Affairs MSc student at King’s College London specialising in Chinese and Middle Eastern Politics. He graduated at the University of Manchester in History and Politics, whilst focusing on Chinese history.

How does the West wish to view China in the next 50 years? Ten years ago, it was seen as a land of opportunity, sadly times have changed. In Europe, the importance of a working economic relationship with China is often acknowledged through gritted teeth. In reality, how can a prosperous world for the United Kingdom and broader international community be successful without the inclusion of China? In short, it cannot.

To begin with, we must take note of the shared problems that both the West and the Chinese face; Nuclear proliferation, Issues of development in areas of Africa, Climate change and pandemic management (to name a few). Benefits of greater economic inclusivity and cooperation between the two will help to solve these issues. However, if friendship continues down a spiral of disrepair, we may fall victim to the problems at present and many more to come.

Former leader of the Liberal Democrat party, Sir Vince Cable came to talk to SACU about his new book, The China Conundrum: Engagement or Conflict. His first visit to China was 30 years ago, whilst working for Shell as their Chief Economist. At the time he was sent out to take part in some due diligence work looking to help Chinese firms make decisions on the future of their economy. Practically, his approaches and understanding of China and politics have not strayed far from his background as an economist. He studied a PHD at Glasgow in economic integration and industrialisation.

After the speech, a point that was quickly raised among the SACU team members was his levelheaded approach to fostering international relations. He breached subjects like the UK’s past relationship with China, Xi’s Belt and Road Initiative (BRI) and ‘the New Cold War’. In his time in government, Sir Vince had the responsibilities of dealing with Chinese companies and officials building up trade in Xi’s Golden Era. Further abroad, he also worked on Xi’s new BRI at the time in Africa, alongside a group of Nigerian businessmen. Years worth of exposure and work led him to write a book on how he sees the progression of the East Asian powerhouse from the past to the present day.

One interesting point he ended on was his comparison between where China has been and where it could be in the future. Sparta, Ming and Davos were used as examples in explaining relationships between security and economics in China. The first favours security over everything. In this instance, there is little need to further mutual interests as threats of invasion are very real.

As we go further down the list, Ming China was described through the example of Zheng He’s powerful fleets that ruled the waves in the 15th/16thC. Their tribute system connected the Middle East, Sri Lanka, parts of Southeast Asia and more to China’s southern coastline. It was by far the most powerful fleet the world had ever seen, towering in size and wealth of Magellan and Columbus. However, almost overnight the emperor decided that these were not in China’s best interests and swiftly closed their doors to the outside world making China focus its attention domestically. Finally, the example of Davos China, a place he stated we were in 10 years ago. Here, businesses from China and the United Kingdom were creating win-win deals with one another. Security is less of an issue between the two as a level of trust is maintained. The economic benefits are in the mutual interests of all involved, this is where the countries should seek to return.

Historically, wounds still affect Chinese politics and social mobilization to this day. Arguably the most prominent of these is China’s 100 years of humiliation. It is something that countries negotiating with them must remember vividly, Donald Trump’s brash rhetoric towards China set back the US-China relations by decades. There have been other mishaps, but none more damming particularly in a period when trust must drive economic integration. Sadly, as we can see from recent situations such as Hong Kong, the UK’s scepticism of Huawei and the most recent COVID crisis, this trust has been distorted by geo-politics. In the case of many Westphalian states the past can only take you so far, but in the case of the civilisation state that is China, the past is the key to the present and future.

Sir Vince made a very compelling argument for the reintegration of UK-China relations, he highlighted some very pressing economic arguments. SACU benefited greatly from the insights he had to offer, and we recommend you all to read his new book! It came out last September and it is available to buy online.

The book talk with Sir Vince Cable was a great success on Zoom and face-to-face. We thank Sir Vince Cable for sharing his valuable experience and thoughts with us; we also thank our brilliant SACU Council member Iris Yau 丘靜雯 for organising this event and all the other members who volunteered to help Iris (Arron, Jiaxi, Caroline, Fred, Ros and Zoë) to make this book talk happen.

Thank you to all participants for joining us online or in person at The Exchange, St Marys University, Twickenham.

The full recording is available here

The talk was chaired by 丘靜雯 Iris Yau FRSA FHEA. Iris is a member of the Council at the Society for Anglo-Chinese Understanding (SACU); a fellow of the Royal Society for Arts, Manufactures and Commerce (RSA); a fellow of the Higher Education Academy UK (Advance HE); Iris has curated and produced exhibitions including ‘Iris’s Silk Route’ at University of the Arts London, ‘Opium, Silk and the Missionaries in China’ at the Brunei Gallery, SOAS University of London.