Jenny Clegg is a Vice-president of SACU. She was a Senior Lecturer in International Studies, and a China Specialist at the University of Central Lancashire and is the author of ‘China’s Global Strategy ; Towards a Multipolar World’ published by Pluto Press. She talks here about SACU’s place in the increasing of understanding on China.

SACU was launched in May 1965 with the basic aims to spread knowledge of China in Britain, dispel misconceptions and counter misrepresentations. In his inaugural speech, Joseph Needham, SACU’s founding chairperson, highlighted the problems of ‘whopping lies’ – racial stereotypes such as “All Chinese are inscrutable’ ‘Chinese people look exactly alike’ …‘you can never tell what they are thinking…’; half-truths, frequently arising from a lack of historical perspective, for example, the pride of Chinese people in their humanistic heritage is taken for a ‘superiority complex’ when in fact they are amongst the most internationally minded people on earth; and ‘blind ignorance’ especially the failure to grasp why it is important, even urgent, to understand China.

For Needham, the point in a nutshell was that ‘the British people and the Chinese people must come to know each other better’. The international situation in 1965 was rapidly deteriorating with China increasingly isolated. Throughout the 1950s, China had come under frequent threat from US nuclear weapons; now the US was on the brink of another war in Asia barely ten years after the Korean armistice. China remained excluded from the UN, with Britain supporting the US demand for a two-thirds majority vote on its admittance. Following the Sino-Soviet split, it was even more vulnerable.

So in Needham’s words, it had become ‘urgently necessary for our understanding of world affairs today that the Chinese point of view on all kinds of matters, political as well as cultural, should be made known’. The point was to do so ‘without preconceived bias or ideological inhibitions, yet not necessarily without constructive comment and sympathetic criticism’. In this way, SACU could make ‘a great contribution to the development of world peace and international comprehension’.

The Society was to be a broad-based movement, building support for China initially in cultural and academic circles. It was to be non-political, that is ‘not designed for direct political action, but …concerned with politics in the sense that we want to know and make known what the Chinese think and say about them, especially having in mind the basically humanistic and altruistic aims of the society which they are building in their country’.

Fifty years on, the international situation is very different. Long gone are the days when China was a beleaguered country in need of international support. China today is changing the world, transforming itself as it does so with breathtaking speed. Ten years ago, the Chinese economy was more or less the same size as Britain’s; now it is four times larger. A future in which China’s economy is two, even three, times larger than the US is not unimaginable.

The challenge of understanding China remains; indeed it is vital to our future. But Britain has been slow to respond. The view that ‘China matters little,’ in the words of the much-acclaimed mainstream China expert, Gerald Segal, (Does China Matter? Foreign Affairs, Sept/Oct 1999), has held too much sway, whilst SACU’s call over the years for China ‘to be treated seriously’ has been contained at the margins.

It is true that momentum is picking up: not only are more and more schools, businesses, universities, and NGOs building direct links with counterparts in China; they also operate there. And the exchange is becoming two-way: Britain now hosts the largest number of Confucius Institutes of any country in Europe. But in 2013, there were only 2,245 students taking Mandarin A-level, fewer than one percent of the total and up a mere 445 from ten years previously in 2003. 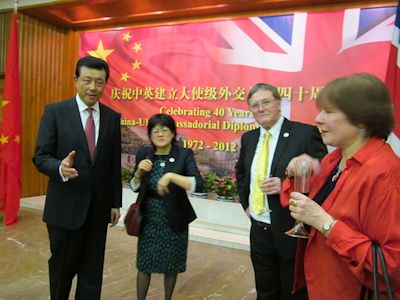 SACU Council members (Zoe Reed, Chris Henson and Linda Rosen) with the Chinese ambassador, Liu Xiaoming , at the Embassy to celebrate 40 years of diplomatic contact between the UK and the PRC during March 2012.

The level of public discussion and debate about China’s rise is woefully inadequate. At last year’s Labour Party conference, whilst the leadership pronounced on Britain’s global role, in the main hall, the Chinese for Labour group were hard pushed to draw more than 30 to 40 people to their fringe meeting on ‘What can we learn from China’. The Conservative party may be doing a bit better.

In my classes I see students struggle to find ways to talk to each other across the gulf between our own deeply rooted liberal humanitarian aspirations and China’s authoritarian developmental state. Whilst the British students complain that Chinese students ‘keep themselves to themselves’, the latter ask me: ‘Why do they always ask about Tiananmen?’

Then again, take the massive public coverage of the World War One Centenary last year: where was there mention of the 140,000 Chinese labourers who worked in and around the battlefields of France? We have memorials in Britain to war horses but not to the thousands of Chinese who lost their lives in the service of the British army. Will this year’s commemoration of the 70th anniversary of the WW2 victory be different and mark our alliance with China? Who in Britain knows, as Chinese schoolchildren do, of the battle of Yenangyuang in Burma, when, in April 1942, Chinese troops rescued some 7,000 British soldiers encircled by the Japanese army from annihilation?

One prominent politician who is taking China seriously is Liam Byrne, Shadow Minister for Higher Education, whose book, Turning to face the East (it’s all about China in fact), argues that we need to re-orientate towards China, and fast. Our political leaders, he suggests ‘should know as much about Sun Yatsen as they do about Abraham Lincoln’. Let us recall how, then Premier Wen Jiabao and President Xi Jingping, both on recent visits to Europe, made a point of expressing appreciation of the works of leading figures of European civilisation – Wen Jiabao of Shakespeare; and Xi Jinping of Montesquieu, Rousseau, Sartre and others.

Addressing the problem of lack of trust, Byrne criticises ‘megaphone diplomacy’ – ‘wading in as foreigners with loud, insistent arguments about what China is doing wrong and how it must change’. ‘We should acknowledge that China is reforming itself’, he says, ‘and when we frame arguments about human rights, the rule of law and democracy, we at least need the good grace and self awareness to know our history’.

Byrne hits the nail on the head when he complains of too much punditry going over and over the same ground: Whither China? Is it going to implode? Is it going to master the capacity to innovate? Is its economy going to land soft or hard? Will it ever improve its human rights record?’ The ‘rights’ business, he argues, is not a one-dimensional affair but an agenda. ‘And on much of that agenda China has made extraordinary progress in developing the economic and welfare rights of its citizens…’ Indeed I would point out that as we enter the final year of the 1990-2015 Millennium Development Goals, China’s reduction in poverty of 660m people comprises over 70 per cent of the world total. Should we not at least say we share some values with China?

Over the years, well over ten thousand people have been members of SACU at one time or another. But following China’s twists and turns over the decades has proved arduous as the society has sought to adapt and change with the times. SACU has continued to keep a thread of cross-cultural ‘understanding’ alive, offering a source of information and a focus for those with a particular China interest. Relations with the Chinese People’s Association for Friendship with Foreign Countries,(CPAFFC), which were broken off after 1989, have now returned to a firmer footing.

What then is the ‘understanding China’ experience? I’ve known some businesses to prepare their staff for a visit to China with an A4 list of tips on local customs (e.g. use both hands when presenting your name card) so as to ‘avoid cultural misunderstandings’. Many of us seek the individual approach, offering a hand of friendship especially to the Chinese students coming to Britain or going ourselves to teach in China.

For SACU today, its original mission to help overcome misplaced suspicion and misunderstanding of China in Britain remains relevant. However understanding China requires more than simply rebutting the distorted images of Sinophobia, or acquainting ourselves with the positive, not just the negative, aspects of Chinese life. It demands a more holistic approach.

Needham’s key point was that, ‘with China being not simply a different country but a basically different civilisation’, this required a ‘genuine effort towards understanding’. Sinologist and radical scientist, Christian and socialist, Needham, through his profound study of China’s science and civilisation, had reached the conclusion that China and Europe were equal but different, having followed unique paths of historical development. They could simply not then be compared through the same prism.

The challenge that Needham set was to understand ‘the meaning of China, past and present’. No doubt this is very different for people from different countries: from Venezuela to India to Britain and so on. SACU in fact stands within a network of friendship associations which each has its own history and status in relation to its own government. The Brazilian friendship association for example was set up in 1984 by a lawyer who, in 1969, had pleaded in court on behalf of the members of delegation from the People’s Republic of China who were arrested by the Brazilian military government. Today, the association has a much stronger standing under the Workers’ Party government.

China can stand up for itself. The question Byrne poses is: can Britain? On the business front, trade delegations from Britain to China invariably face a barrage of public criticism for putting ‘business before human rights’. For its part, China approaches business in a more holistic framework of understanding and friendship which is deeply embedded in the Chinese psyche: as one Chinese businessman in Manchester once told me: why would I do business with someone who is not my friend?’

We should be thinking about our own economic future, our own human rights in the form of jobs. ‘We would do well’, says Byrne, ‘if we spent half of our time reflecting not just on China’s future, but on our shared future…globally, there are causes – counter-poverty, climate change, tackling piracy – on which we work together’. Meanwhile students of Chinese at our universities are graduating with often unrealistic expectations of going to China to find work, only to discover themselves competing with their Chinese classmates for jobs. Instead they should set to work building up a ‘China sector’ within Britain.

Our view in SACU remains that a flourishing relationship between China and Britain grows on a broader basis of understanding among the public, one that, if not uncritical, starts at least from a friendly frame of mind. China is now telling its own story, something we can engage with. And SACU also has its own distinctive voice to add with its story of its own people-to-people connection. In this we should see ourselves as inheritors of the traditions of support for the Chinese people dating back to the Chartist opposition to the Opium War.

Our 50th anniversary provides an opportunity to further public debate and discussion about what it means to understand China. Let’s have less of the punditry and speculation about matters that are no more possible to determine about Britain’s future than China’s. Whatever we do, let’s get talking about China.