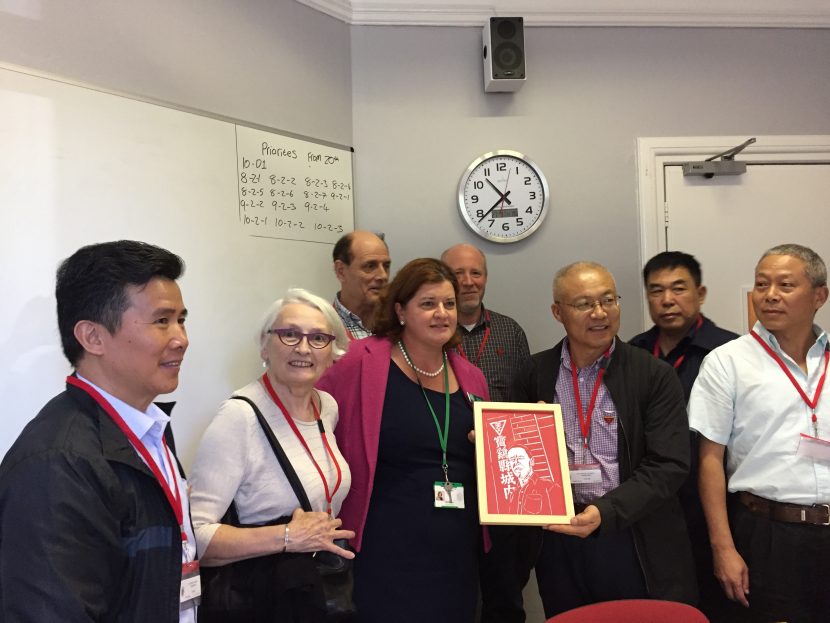 SACU welcomed an ICCIC delegation for their short stay, 26th-30th September, which they made as part of the 80th anniversary celebrations of the founding of the Chinese Industrial Co-operatives – Gung Ho movement. For this trip the delegation wanted to follow in the footsteps of George Hogg. ICCIC stands for the International Committee for the Promotion of Chinese Industrial Co-operatives (Gung-Ho-ICCIC) (www.gungho.org.cn) which has been helping people establish member-owned co-operative enterprises since 1937. In an extremely short trip the delegation managed to visit all the main British sites associated with George Hogg (1915-1945), journalist, vocational teacher and key player in the wartime Gung Ho co-operative movement in China’s North West.

The ICCIC delegation was led by Michael Crook, Chair of ICCIC and included:

Outline of their packed programme:

27 September (morning) St George’s School, Harpenden, accompanied by George Hogg’s niece Vanessa Dingley and great nephew Peter Jarvis, who is SACU’s webmaster. David Waters, Assistant Head of St George’s, and Miss Helen Barton, Headmistress, welcomed the delegation and gave a brief tour including the Old Library where George Hogg and other members of his family are listed on the oak panelled walls. There was a display of papers from the school’s George Hogg Archive. Rosemary and Gavin Ross of Harpenden Local History Society then led the delegation to see ‘Red Gables’, the first family home of the Hogg family in Harpenden and where George was born, and ‘Wayfarings’ where the family later moved to, nearby.

27 September (afternoon) Needham Research Institute, Cambridge. John Moffett, Librarian of the Needham Research Institute, welcomed the delegation and showed them round the purpose-built Institute, opened in 1991 and now permanent home for Professor Joseph Needham’s research collection. John introduced the delegation to Professor Mei Jianjun, the NRI Director, and then displayed various photos and archives of Joseph Needham in wartime China.

After an overnight stay in Manchester and accompanied by Jenny Clegg, SACU Vice President and Walter Fung, China Eye Editor, the delegation went to Rochdale Pioneers Museum, birthplace of the modern co-operative movement.

29 September Visit to Wadham College, Oxford University, George Hogg’s former college, before heading back to Heathrow for the flight home.

Michael Crook commented, “The ICCIC will continue to work to promote Sino-British friendly exchanges”. Follow this link for ICCIC’s own account of their visit: http://www.gungho.org.cn/en-info-show.php?infoid=1224

This was a great opportunity for SACU members to meet ICCIC members who have exceptional experience in organising self-help activities and training in co-operative business in the poorer areas of China. It was also a chance to learn more about new developments in the latest reforms to ‘revitalise the rural areas‘.

You can read about the activities of the ICCIC here: http://www.gungho.org.cn/en-index.php

SACU’s relationship with the ICCIC through the George Hogg Education Fund is explained here: https://sacu.org/george-hogg-fund.html

You can see Harpenden Local History Society’s report of the delegation’s visit here: