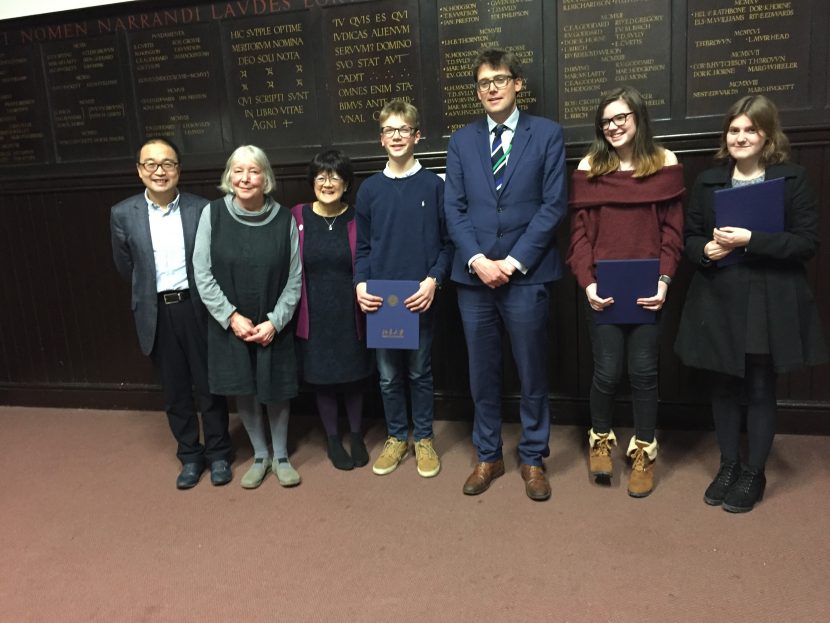 George Hogg (1915-1945) grew up in Harpenden and attended St George’s School. He was a journalist reporting in wartime China and a vocational teacher who ran a school for war orphans. He is celebrated in China for his work in the wartime co-operative movement with a museum and memorial to him in rural North West China.

The students were asked to write an essay entitled: “Global Citizens of the future: to be successful, global citizens need to promote friendship and understanding between all peoples”. Students were invited to write an essay drawing on someone from Britain or China, past or present, who has contributed to Anglo-Chinese understanding and friendship. The essay should draw out some lessons from their approach and behaviours which are pointers for young people seeking to become successful global citizens. The essay competition was open to all senior students at Harpenden schools.

The Awards Ceremony took place in the Old Library where a splendid buffet had been set out. David Waters welcomed the students who had taken part, their families and several SACU members. Zoe Reed, SACU Chair, talked about SACU’s mission to promote understanding and how we are looking to younger people to carry on this work. The winner in the Upper School category was Catherine Beavis, and Isabelle Kinghorn was runner up. Sam Pesez won in the Middle School category. Professor Sun Hua and Zoe Reed presented the prizes and certificates. Prof Sun Hua congratulated these students on taking part and submitting such interesting and varied essays. He expressed his hope that the students who took part would be inspired to continue with their Chinese studies.

SACU would like to thank St George’s School for hosting the competition and awards ceremony and Peking University for generously sponsoring the event. Special thanks to all St George’s students who took part. We are planning another essay competition for Harpenden next year, which we will announce in due course.