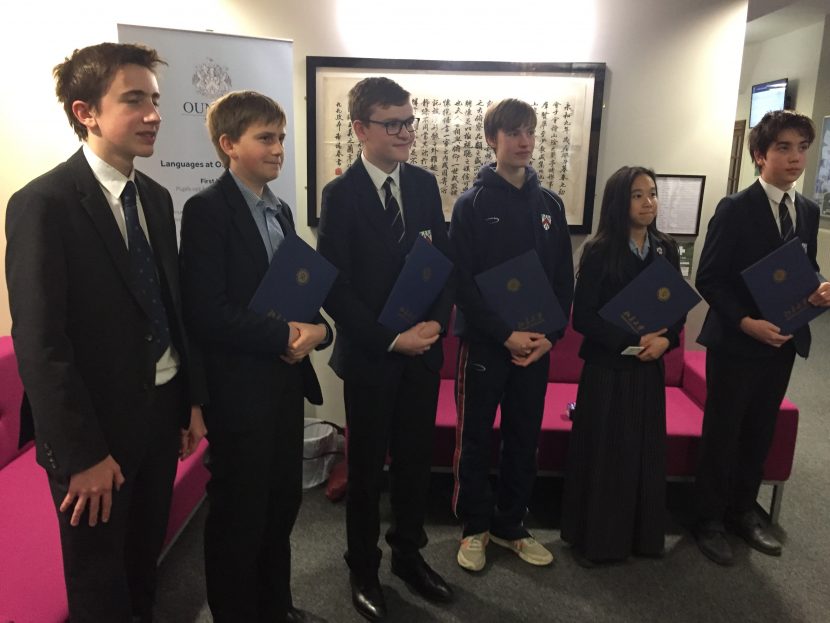 And the winner is …! On Tuesday 4 December the Awards Ceremony of the ‘Joseph Needham China / UK Friendship and Understanding SACU / Peking University Essay Competition’ took place at Oundle School in Northamptonshire.

The students were asked to write an essay entitled: “Global Citizens of the future: to be successful, global citizens need to promote friendship and understanding between all peoples”. Students were invited to write an essay drawing on someone from Britain or China, past or present, who has contributed to Anglo-Chinese understanding and friendship. The essay should draw out some lessons from their approach and behaviours which are pointers for young people seeking to become successful global citizens. The essay competition was open to all senior students at Oundle School.

Annabel Hurley, Head of Chinese, welcomed SACU visitors and students to the Adamson Centre, the school’s modern languages building, for a guided tour of the building, lunch and the prize-giving. Annabel opened the ceremony and Zoe Reed, SACU Chair, talked about SACU’s mission to promote understanding and how we are looking to younger people to carry on this work. Dr Frances Wood, as head of the Judging Panel, then announced the winners.

SACU would like to thank Oundle School for hosting the competition and awards ceremony and Peking University for generously sponsoring the event. Special thanks to all Oundle students who took part. We are planning another essay competition next year, which we will announce in due course.