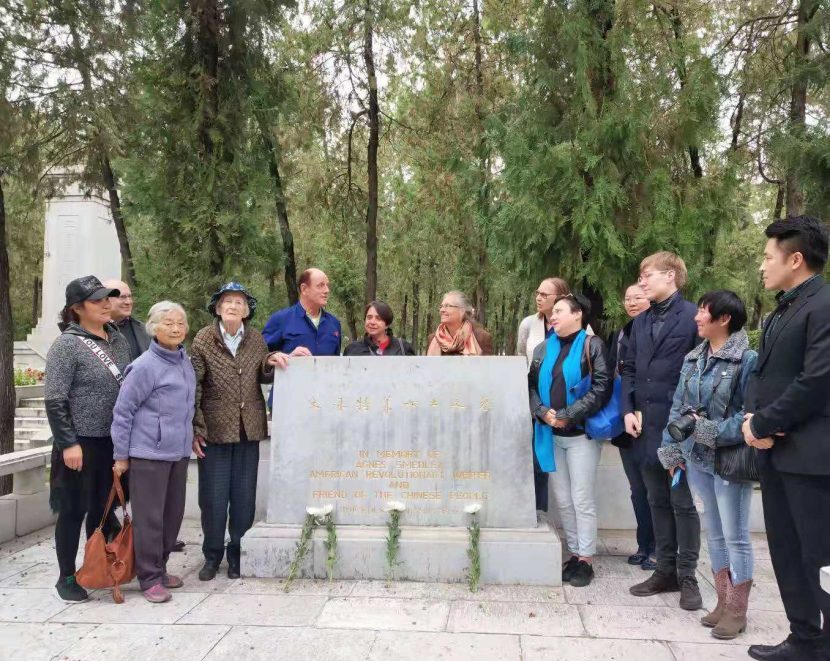 We are delighted to report on the first event of SACU’s newly formed SACU Beijing Chapter. This report has been written by SACU member Tamara Treichel, cosmopolitan and creative writer, based in Beijing:

A tour of Beijing’s Babaoshan Cemetery given by Michael Crook on October 12, 2019

Our Babaoshan guided tour, Society for Anglo-Chinese Understanding (SACU) Beijing chapter’s first event, given by SACU member Michael Crook, a British expat in Beijing, was a big hit! Michael did the heavy lifting, and he was the perfect person to give the tour because he knew some of the foreign friends buried at Babaoshan personally. SACU member Tamara Treichel helped Michael organize the event in the form of suggestions and notes.

The foreigners interred at Babaoshan had helped China’s cause by being involved in the building of a new China that eventually led to the foundation of the People’s Republic in 1949 either by supporting the cause politically, giving favorable coverage to China during that era in history, or providing medical or some other form of assistance.

Michael’s mother Isabel Crook, 103, was in attendance as well and also knew some of the foreigners who had found a final resting place at Babaoshan. Isabel, a Canadian anthropologist who made a lot of contributions to the founding of New China in 1949, won the prestigious Friendship Medal awarded by the Chinese government in the Great Hall of the People on September 30 this year.

Isabel still has incredible stamina for her age. She occasionally requested to get up from her wheelchair and walk several steps during our tour and placed some white chrysanthemums that had been made available to us in front of the headstones. It was a delight for all to have her participate in this event. A Chinese woman called Fu Han, who had made a touching documentary about Isabel’s life called Isabel Crook: Childhood Memories from Bailuding,  also joined our tour, as did Israel Epstein’s widow, Huang Wanbi.

There were over a dozen participants from various countries on the tour — Britain, the United States, Germany, Brazil and Poland, next to of course China. From retirees such as Tony Boyle, a British expat whose wife Helen runs the Migrant Children’s Foundation, to Fritz Beck, a German exchange student  from the University of Heidelberg who came to Beijing Foreign Studies University to pursue his Sinology studies, various ages and backgrounds were represented.

Michael walked us from tombstone to tombstone, introduced Babaoshan’s foreigners to us and regaled us with tales about their lives. I had made my article from the SACU Autumn 2016 issue available to him, in which I introduce several of those foreigners, and he augmented it with some Brits, e.g. Rose Smith, a journalist and activist, and Joshua Horn, a doctor.

In a columbarium, Michael took out the beautifully carved box containing British surgeon Dr. Joshua Horn’s ashes, and told us his story and how he had contributed to health care in China. Horn, Michael said, could also quote poetry and was once even called upon to help a giraffe in China who had injured a limb (medicine was not so advanced in China at the time and the giraffe was a precious animal in a Chinese zoo).

The tombstones we visited belonged to Israel Epstein, one of few foreigners to acquire Chinese citizenship and become a member of the Communist Party of China and editor-in-chief of the magazine China Reconstructs (later China Today), Hans Mueller and George Hatem, a German and U.S. doctor respectively, who contributed to healthcare in China, Agnes Smedley and Anna Louise Strong, two American activists and journalists/writers who helped New China’s cause with their favorable coverage of the country, Eva Siao (née Sandberg), a woman of German Jewish origin whose unposed photographs of ordinary Chinese citizens became famous, and Douglas Frank Springhall, a British Communist activist.

When prompted, Michael also talked about foreign friends who are not interred at Babaoshan, e.g. Joan Hinton, an American nuclear physicist who contributed to China’s agricultural development. He said Joan was a “firebrand” and liked to play violin. Michael remembered being at her 80th birthday celebration, which was attended by many prominent guests.

Michael’s anecdotes all brought us closer to these remarkable foreigners, and at the end of the event, it felt as if we had met them personally. Despite the solemn venue, we did seize the opportunity to take some photos and had a couple of laughs… Truly an unusual and rewarding experience for all!

If you are a SACU member based in Beijing or visit on occasion and would like to join future activities of SACU’s Beijing chapter, please email membership@sacu.org.uk and we will put you in touch with Tamara and Michael.

Read more by Dr Tamara Treichel in Beijing on her website: http://tamaratreichel.com/chinese