“The gift that only the patron can give”, is the way a Chinese Han lacquer cup was described in BBC radio’s “history of the world in 100 objects”.  Neil MacGregor, director of the British Museum had in his hand a lacquered cup found near Pyongyang and made around 220 CE.

The character for ‘give’ (above centre) is composed of the silk radical on the left, sī and a verb meaning ‘unite’ at right, hé. It may be thought of as “the gift of silk unites the empire”
Silk garments were symbols of imperial status and were highly valued as gifts

The ancient tradition of patronage through gift-giving seems to continue for the PRC as “panda diplomacy”. “Tuányuán” (above right) is a gift only China can give.

China loaned Taiwan tuántuán (团团, ‘reunion’) and yuán yuan (圆圆, ’round’). Taken together the mated pair mean 团圆 tuányuán (eventual reunion). As a diplomatic overture, is that brilliant or what? The names were lost on Westerners, but not on the Taiwanese.

Máo zédōng in 1972 “gifted” to Nixon two giant pandas: Ling-Ling, female (玲玲, “tinkling of jade pieces”, which were held by emperors to show their rank) and Hsing-Hsing, male (兴兴, “prosper”). In 2019 Xi Jinping made a 15 year loan to Russia of Ru Yi and Ding Ding. Were these successful overtures?

The “giant cat bear” (大熊猫, dà xióngmāo) was adopted by the World Wildlife fund, but is ecologically a poor symbol. It was on a course to extinction in the 1950s, restricted to one nutritionally poor bamboo and hemmed in by humans. Then its political value was realised and huge conservation resources were given.

The PRC declares its belt and road initiative (一带一路, yīdài yīlù ) as its “gift to the world”, costing it $US900 billion. The “silk road” land route is by analogy with the Great Silk Road and the other element is the 21st century “maritime silk road”. Western commentators have managed to see it in a more malign way, such as binding the recipient into a debt repayment burden it cannot meet. Or is that projection of Western banks’ way of doing things? There are risks in each direction: China stands to lose its investment if it falls out with a country, but that country is seen as under Chinese patronage. 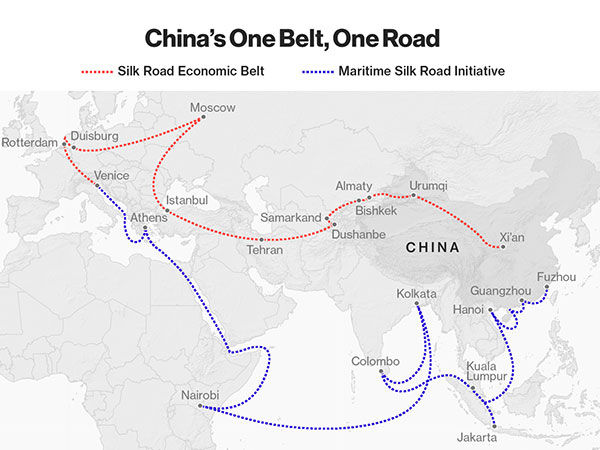 The UK seems to have lost the ability to think big abut public works. HS2 could have been a maglev in a tunnel. The North Sea could be seen as waiting to be empoldered and turned into fish farms, rather than as an argument with the EU about catches of nearly extinct fish. Perhaps a road bridge to the Netherlands could be part of Belt and Road? That would be a possible choice for the UK: accept Chinese economic patronage, and risk being seen as its stooge.