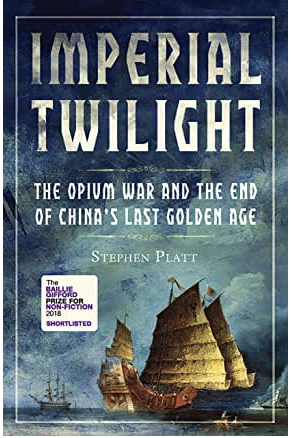 Dr Jenny Clegg led the discussion on the Opium Wars based on the American historian, Stephen Platt’s Imperial Twilight: The Opium War and the End of China’s Golden Age (2018). With the first salvos of the first Opium War in 1839, Britain opened China to a ‘Century of Humiliation’ where the once mighty Qing dynasty faced internal rebellion and rapacious imperial powers.  Platt sets out both the British and the Chinese sides as events moved inexorably to war. This potent turning point in China’s history ‘stands for everything that today’s China seeks to put behind it’, giving Platt’s narrative ‘important implications for today’s uncertain and ever-changing world.’  While happening nearly a century and a half ago, the topic of Platt’s book has a contemporary resonance in light of recent political developments.

Jenny shared her thoughts and impressions of Platt’s book, followed by a short presentation by Walter Fung, China Eye Editor. There followed a stimulating discussion on this defining moment in Anglo-Chinese history which has repercussions to this day. Our British, Chinese and British Born Chinese members shared wide-ranging views and experiences in an informal and relaxed setting.

Over the course of the debate, a wide range of topics and perspectives were present.  These included the politicisation of the history of the Opium Wars and the Century of Humiliation by both sides as well as the controversies over the nature of the imperial policies in the wake of the Opium War and the role they played in China’s long term reform and opening up.  This comes at a time where Britain’s imperial history has come under renewed scrutiny as a result of the toppling of statues of major figures from this period.  It is this aspect, alongside the parallels between the language of the imperial agents of yesteryear and the China hawks of today that has underlined the continued relevance of Pratt’s book.

Upon reflection of the topic in light of recent events, it is necessary to re-evaluate the Opium Wars as part of the wider debate regarding the controversies of Britain’s imperial history.  This has been particularly notable in Gladstone, one of the rare dissenting voices at the time, who called the conflict “a most infamous and atrocious war, more calculated in its progress to cover this country in permanent disgrace”.  As we face a changing era in the relations between Britain and China, Gladstone’s words now have a particular significance to today’s listeners.

A recording was made and the link has been made available to SACU members though the members’ newsletter.

This SACU ChinaChat was a great success, enabling members to take part from all over the country and as far away as Xian, even though it was 2.00am there! Any future SACU ChinaChats will take account of the time difference between the UK and China.

The Opium War Museum in China’s Guangdong province “focuses on the Opium trade, its suppression by the official Lin Zexu, and the two Opium Wars (1839–1842 and 1856–1860, respectively)”:

We are grateful to the SACU ChinaChat participant who gave this web link to the meeting.