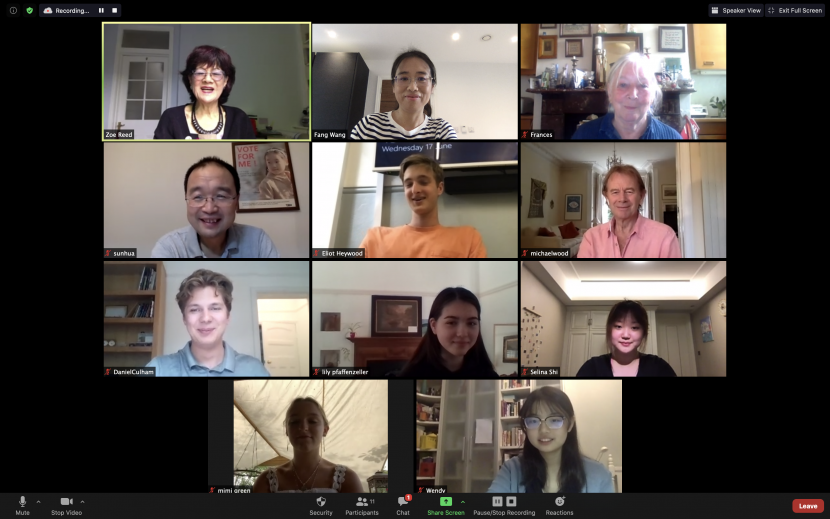 SACU and Peking University’s joint UK/China Friendship and Understanding Essay Competition 2020 has taken place and the winners were announced online in a Zoom ceremony on Wednesday 17 June 2020. Zoe Reed, SACU Chair, hosted the Awards Ceremony which this year was moved online because of the current pandemic crisis. The entrants joined the event from as far away as Shanghai.

There were 27 entrants from 7 schools who submitted entries on this year’s theme of ‘Overcoming the Cultural Gap between China and the West’. The schools taking part were Marlborough College; King’s College School (Wimbledon); Highgate School (London); Charterhouse School; Cheltenham Ladies’ College; The King’s School, Canterbury; and Oundle School.

Dr Frances Wood, SACU Vice-President, expert and renowned author on China, and former Head of the British Library Chinese Collections, was chair of the Judging Panel. She announced the winners and discussed their essays, saying she was “massively impressed” with the very high standard of the entries. She found all the essays to be fascinating and very thoughtful; students had really engaged with the problem and offered very good examples of how cultural differences can be overcome. She also thanked the students’ teachers for their huge contribution to their students’ learning and understanding of Chinese language and culture.

Up to 15 years category: 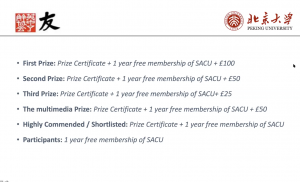 Dr Fang Wang coordinated the Essay Competition and explained the awards to the winners. There were money prizes (1st £100, 2nd £50 and 3rd £25 in each category for the essays and £50 for the multimedia category) and prize certificates for all winners. All participants are also offered one year’s complimentary student membership of SACU, including the quarterly magazine China Eye, monthly eNewsletters and access to all SACU events.

Professor Sun Hua offered his “heartfelt congratulations” to the entrants. As Director of the China Center for Edgar Snow Studies, Peking University, he has hosted commemorative and academic events for college and high school students in conjunction with foreign universities and institutions and has worked hard to encourage young people to get involved in people-to-people exchanges. He outlined the progress of the SACU/Peking University Essay competition which began as part of the marking of SACU’s 50th Anniversary in 2015 to continue the mission started by Professor Joseph Needham who founded SACU, with others, in 1965. That first competition was held in Oundle School, Joseph Needham’s former school. The second competition in 2018 saw increased participation with Oundle School and St George’s in Harpenden, the former school of George Hogg, who worked in the co-operative movement in North West China during World War II. This year’s competition was the largest yet with seven schools taking part and the introduction of a multimedia category. Professor Sun Hua was pleased that some winners of previous competitions have since enrolled at Oxford University, LSE or SOAS to study Chinese history or culture and looks forward to welcoming some of this year’s entrants to study at Peking University!

Rounding off the Awards Ceremony, SACU’s President, film maker and historian Michael Wood, Professor of Public History at the University of Manchester and creator of the BBC TV’s ‘The Story of China’ series of films, congratulated all the students for their essays which showed such understanding at such a young age and urged them not to “lose that passion” but to “keep that intense affection and understanding that you have for Chinese civilisation and cultivate it. It is really important now that we understand each other better in east and west and we build bridges…”

SACU thanks Peking University for generously sponsoring this event, the schools for their commitment during this demanding school year, the Essay Competition Judging Panel for their hard work and most of all, thanks to all the students who took part – congratulations to them all.

What a stimulating and uplifting occasion it was!

Please find the news on the homepage of Peking University (in Chinese):