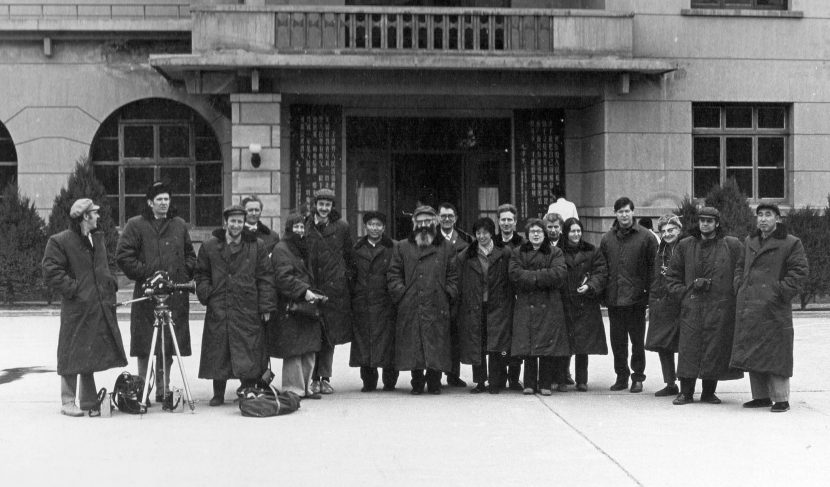 SACU members, long-standing and new, had a chance to get together at the SACU Spring Social, held on Tuesday 17th April 2018 at the Strand Campus of King’s College London. This was the first of this year’s SACU ChinaCafés, members-only events with informal discussions and refreshments. Anyone interested in SACU is welcome to come along to a SACU ChinaCafé and join on the evening and we were delighted to welcome several new members at this event.

The theme for the evening was “SACU’s early days”. Zoe Reed, our Chair, gave an introduction to SACU and its early days for the benefit of newer members. SACU was established in 1965 by Dr Joseph Needham, eminent Cambridge academic, and others, as a cultural bridge between the UK and China. The society had thousands of members and was the main route to China in the 1970s. Throughout the country’s era of international isolation, SACU maintained strong links with China.

Zoe outlined SACU’s current activities and new projects including the George Hogg Education Fund which has been launched to raise funds for CO-OP ADOPT, a training programme to support people setting up co-operatives in rural north west China.Chang LIU, PhD student at KCL and SACU member, spoke about SACU’s Archive Project which is being overseen by our Vice President Frances Wood and aims to put together a full history of the society. The evening gave Chang the opportunity to meet and arrange interviews with several long-standing members to collect data.

Zoe also spoke of her own connections with Joseph Needham as she is the daughter of one of the engineering students that Needham brought over to England in the late 1940s.

Sally Greenhill then showed photographs that she and husband Richard had taken in the 1970s while visiting China with SACU groups. In 1971 Sally and Richard were members of the first large group to go to China from the UK as the Cultural Revolution began to wind down. Their journey started at the southern border crossing of Shenzhen, and in their fortnight’s visit travelled to Shanghai, Peking (Beijing), Wuhan, Xian, Nanking (Nanjing) and Yenan.

The border at Shenzhen

Until this visit in 1971 China had been almost totally closed to the west since the start of the Cultural Revolution in 1966. The images taken by the Greenhills were some of the first to give the west an insight into modern China. They recorded life in China’s cities and countryside, schools, PLA (People’s Liberation Army), factories (run by Revolutionary committees of workers, peasants and soldiers), barefoot doctors (peasant paramedics) and the famous commune of Tachai (Dazhai).

SACU members, both longstanding and newer, all appreciated the presentation which prompted many memories and discussions. Several long-standing members added their own experiences on SACU tours in China in 1970s and early 1980s. A SACU tours brochure from 1982, which SACU member Dave Clare brought along, offered 17 different tours! Conversation continued over a few drinks in The Philosophers Bar and so concluded a very enjoyable evening for SACU members.