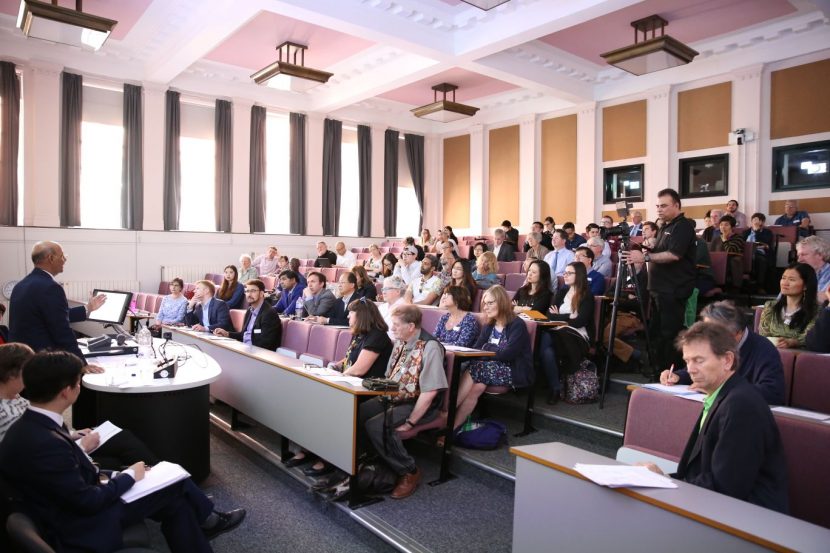 The event consisted of short presentations by four expert speakers followed by a panel discussion of the scope and impact of the Belt and Road Initiative (BRI) on the countries directly involved and the world in general.

The panel was composed of:

Professor Michael Wood of the University of Manchester (historian, writer, broadcaster and presenter of the BBC four-part series, ‘The Story of China’).

Shao Zheng, Counsellor for Policy Analysis and Strategic Planning at the Chinese Embassy in London.

Dr Jenny Clegg, SACU Vice-president (standing in for Keith Bennett, Vice-Chairman of the 48 Group, who was unable to come).

Afzal Khan CBE, MP for Manchester Gorton opened the proceedings and welcomed everybody to the forum which was chaired by SACU Chair, Zoe Reed.

Zoe added her welcome to everybody to this major SACU event in Manchester. The vast majority of attendees were in fact not members of SACU so Zoe explained the origins of SACU, its mission and emphasised the benefits of joining. One of the objectives of the event was to raise the profile of SACU in Manchester.

Each of the four speakers was requested to limit their contribution to 10 minutes to allow more time for question and answer and networking in the limited time available.

Jenny Clegg outlined the scope and nature of the BRI. This is a change from Deng Xiaoping’s advice to China many years ago, to keep a low profile and bide its time. The BRI will connect all the countries along the overland route and the sea road for economic, cultural and trade co-operation. The BRI will benefit all involved with ‘win-win’ partnerships.

It will link countries together and foster creativity and innovation through people-to-people contact. It has already started to a certain extent with China’s ‘go west’ strategies to develop the in-land and western areas of China. The freight train service from China to Europe is another example.

Shao Zheng provided data and details of the scale and dimensions of the BRI. There is potential development of $4 trillion worth of trade along the New Silk Roads. Over 130 countries have expressed interest and already 80 have signed documents with China. In addition, 734 pairs of cities in 53 countries have ‘twinned’. The BRI does not extend only to countries along the Silk Routes, Latin American countries such as Mexico want to be involved.

Mushtaq Lasharie was especially enthusiastic. He described the China Pakistan Economic Corridor (CPEC), which is only one component of the BRI,  as a ‘game changer’ for Pakistan. He had just returned from a business tour of Pakistan.

Baluchistan, which is in the poorest region of Pakistan stands to gain considerably. Gwadar, a small port on the coast with a current population of 100,000 is scheduled for massive development as the terminal for the main trade route from Xinjiang in China to the coast in Pakistan. Gwadar is a deep-water port and is expected to expand to house a population of two million. Investment in this area will reach a huge $62 billion. Mushtaq pointed out that whilst Pakistan needs China to invest, China also needs CPEC to be a success story for the credentials of the BRI. He warned that those who choose not to be included, will regret it – probably a comment directed at India!

In a lively presentation, Michael Wood provided the historical background on China’s relation with the outside world. Contrary to common belief China has always ‘connected’ with the world and always has been a maritime nation, especially south China, around Guangzhou. China had always looked outward, especially during the Tang Dynasty. It is little recognised that as a result of these connections, Chinese society is in fact very diverse. Michael recalled visiting a number of mosques in western China with female imams. These outward-looking experiences and traditions  established will assist in the development of the BRI.

The question was asked: ‘How will Britain benefit?’ The answer is that Britain will gain in various ways but especially from its expertise in banking, insurance and other financial services. In addition, Britain has experience and specialist knowledge of the legal aspects which will be necessary with such a complex exercise such as the BRI involving so many different countries.

Rhys Whalley of the Manchester China Forum provided some encouraging and positive closing comments. His organisation has contributed to the provision of direct air links from Manchester to China, which has already resulted in significant increases in trade with China and the North-west of England.

Overall, the forum was judged to a resounding success, especially as it was the first major SACU event in Manchester for some years. Altogether over 70 people attended; the majority of them attending a SACU event for the first time. Full credit must be given to Jenny Clegg, SACU Vice President, who both arranged and participated in the event and to Ros Wong, SACU Council member, who handled the administration and registering of delegates.

We acknowledge the support of the Chinese Economics Association, the Confucius Institute at Manchester University and especially that of Third World Solidarity who sponsored the refreshments.