This article by Derek Bryan, SACU’s First Secretary, recounts the events leading up to the formation of SACU in 1965 and was written to mark its tenth anniversary in 1975.

In the busy confusion of the new premises in Camden Town in 1975, it requires an effort of memory to think back to the days in the spring of 1965 when SACU was coming into being, and to the years at Warren Street that followed. When the society was founded, in May 1965, Britain was still in the first year of Harold Wilson’s premiership, but the People’s Republic of China was already over 15 years old. At the time of China’s Liberation in 1949, the post-war London government was still in office under Attlee. Although according partial diplomatic recognition in January 1950, it was this government, subservient to the US, that took Britain into the Korean War, and set the tone for British-Chinese relations throughout most of the ensuing 13 years of Conservative rule.

Except for a brief interval of détente after the end of the Korean War, this was a period of clear-cut official British hostility to all that China stood for. Throughout the nineteen-fifties, the main source of public information about all aspects of China’s internal policies and developments, and about her stand on external issues, was the British-China Friendship Association, which had been founded in late 1949. The Association consistently attacked British participation in US aggression against Korea, and British complicity in US policy towards Chiang Kaishek, Taiwan and the exclusion of China from the United Nations.

But it was still the era of the Cold War, and the BCFA was a narrowly based organisation with little influence outside small left-wing circles. As Soviet relations with the West started to unfreeze, China began to replace Russia as the big bogey, and new sticks were found with which to beat her: the communes, Tibet, the India-China border dispute. With the coming into the open of the Sino-Soviet dispute in the early nineteen-sixties, the BCFA’s work became more and more difficult, and in the end virtually ceased (cf. China Policy Study Group Broadsheet, June 1964).

Interest in China, on the other hand, was growing, and the moment seemed propitious to make a fresh start with an organisation that would have really broad support. The response to the initial invitation far exceeded expectations, and in a very short time a galaxy of talent, including many of the most distinguished names in the arts, sciences, universities and public life generally, had subscribed to SACU’s aims of fostering friendship and understanding between the British and Chinese peoples. Many of them attended the inaugural meeting in Church House, Westminster, on 15 May 1965, at which our first Chairman (and President) Joseph Needham, gave the keynote address, later reported in the first issue of the newsletter SACU News. 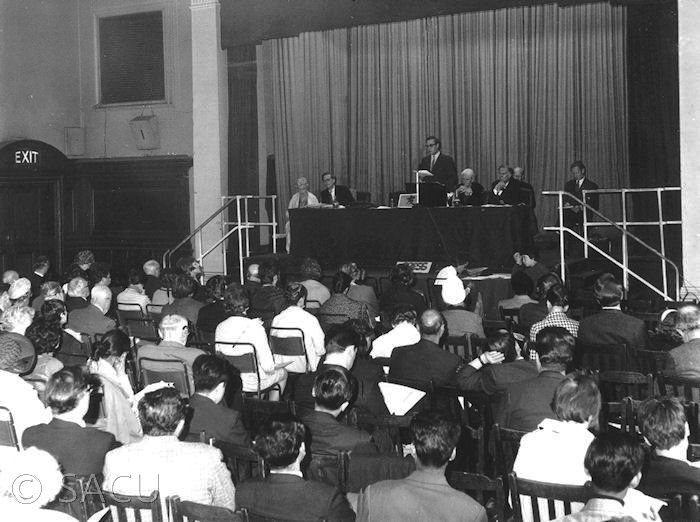 SACU’s First AGM in 1966, the speaker is the author of this article, Derek Bryan. Hugh Trevor-Roper is on his right and Joan Robinson on his left.

SACU’s launching was a great occasion, but it was not easy to keep on course. It soon became apparent that some of those who had lent their names, and even accepted-positions of responsibility in the Society, were interested in coldly ‘objective’, rather than friendly ‘understanding’; a small minority indeed proved actively unfriendly. Early meetings of the Council of Management, held (to suit the convenience of MP members of the Council) in the faded and pompous gloom of House of Commons committee rooms, were often concerned more with inquiring into the propriety of the work of SACU than with furthering it.

It was not only the right that wanted to twist SACU’s purposes, but also the ultra-Left. The first Annual General Meeting held on 21 May 1966, was a stormy one, and in the ensuing year difficulties were aggravated by the fact that official Sino-British relations, as a result of events in Hong Kong and Peking in the summer of 1967, reached their lowest point since the Korean War – indeed, they were in some ways even worse. Throughout SACU’s second year the right and the ultra-left dropped off, a process which helped the Society in the second half of 1967 gradually to re-set its course. The files of ‘SACU NEWS’ from June to December of that year contain much interesting evidence of the way in which this took place, culminating in the policy statement adopted by the Council on 11 November, and printed in the December ‘SACU NEWS’.

But it would be highly misleading to report only the storms of the first two years, spectacular as they often were at the time. The achievements were both more numerous and more significant. The fifty-odd issues of SACU NEWS, containing many articles of lasting value, pioneered the way for CHINA NOW (which last month published its 50th issue with no fanfare at all!). The building-up of the Library started from the very beginning, and has gone on steadily ever since. Indeed, with the exception of tours to China (which owing to the Cultural Revolution did not get under way until 1970) almost all the main activities of the Society – public meetings, film shows, discussion meetings, weekend schools, speakers service, information service and branches – were started in the first year. Some, notably the speakers service, have developed steadily; others have had their ups and downs; no other single event, for instance, has so far equalled the success of the premiere of Felix Greene’s film ‘China!’ at the Academy Cinema, London, in September 1965.

Seeing it all in perspective is not particularly easy for anyone who was involved. But there is one continuous thread – a constant endeavour to provide information and education about China for everyone interested who could be reached. The Cultural Revolution and the ‘Little Red Book’ had a powerful impact on young people in the West, as was seen in Paris in the spring of 1968 and in Britain in a generally less spectacular way in the growth of a new spirit of independence among the young. The steady rise in SACU’s activities from 1968 onwards, particularly the opportunity for increasingly informed discussion about China, provided a focus of interest and an opportunity for political study from which many benefited.

So when, early in 1971, China suddenly became a respectable object of interest, and even fashionable, SACU was able to respond in an informed way. The story is an open ended one: as the crisis in Britain and in the West as a whole deepens, more and more people are asking what is the secret of China’s success, and what lessons can be learned from Chinese experience. In official quarters, however, China may be becoming slightly less fashionable, as the reporting of the Times from Peking, for example, certainly suggests. Much has happened both in China and in Britain since, under Heath, the British government finally bowed to reality in 1972 by recognising that Taiwan is part of China, and put official relations on a correct footing. Even the great Chinese archaeological exhibition of 1973-74 already seems almost to belong to a past era.

In 1975, as always, SACU must continue to be alert to changes in the Britain in which it works, and must go on doing its utmost to show the British people how the Chinese people are working – in the words of the Preamble to the new Constitution of the People’s Republic – to make a greater contribution to humanity.