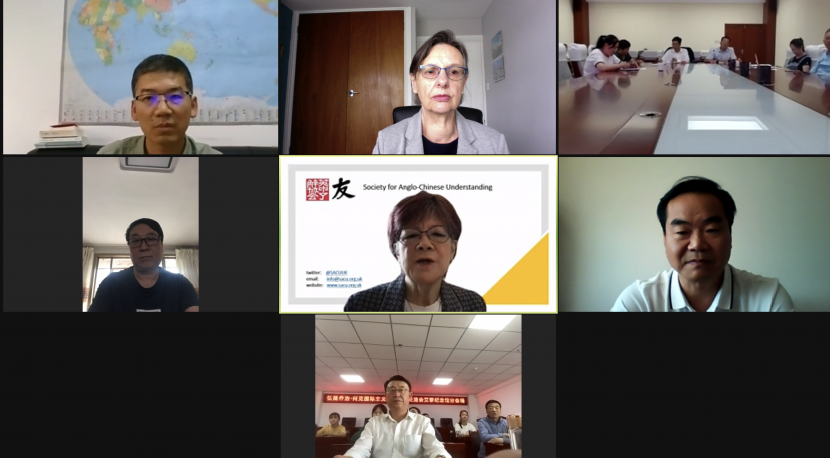 Adapted from the report by the Gansu Sister City Affairs Office

On the afternoon of August 27, the Gansu Provincial Association for Friendship with Foreign Countries organized a video conference with the Society for Anglo-Chinese Understanding to further promote George Hogg’s internationalist spirit, strengthen exchanges and cooperation with the Society for Anglo-Chinese Understanding, and promote the development of sister city relations between Shandan County and George Hogg’s hometown of Harpenden.

Zoë Reed [Sun Ruyi], Chair of the Society for Anglo-Chinese Understanding, briefly introduced the history and functions of the society, and said that she would assist the province to carry out educational and cultural exchanges and sister-city cooperation with relevant parties in the United Kingdom.  Zhangye City Government Deputy Secretary-General Wang Yongxin stated that Zhangye City Government would support Shandan County and Hogg’s hometown in developing sister-city relations.

Zhang Youwu, Director of Shandan Rewi Alley Memorial Hall, introduced the construction of the new museum and related activities organized and carried out.  Wen Yongming, Deputy President of Shandan Bailie School, reported the basic situation of the school and hoped that the Society for Anglo-Chinese Understanding and the Provincial Friendship Association would continue to support the school’s international education cooperation, especially by sending qualified British teachers to teach in China.  Mr Liu Pengcheng, Director of International Affairs, Lanzhou City University, introduced the Rewi Alley and George Hogg commemorative activities carried out by the school in recent years.

The meeting was presided over by Mr Zhu Yuming (Stephen), Director of Sister Cities Affairs, GPAFFC, and related comrades from the Foreign Affairs Office of Zhangye City and Shandan County attended the meeting.  The convening of this meeting further implemented the instructions of Mr Lin Songtian, President of the Chinese People’s Association for Friendship with Foreign Countries (CPAFFC), on strengthening the “four friendships” and “digging into the resources of international friends” during the investigation in Shandan, as important measures to do practical things for the people.

(adapted from the contribution by the Sister City Office)