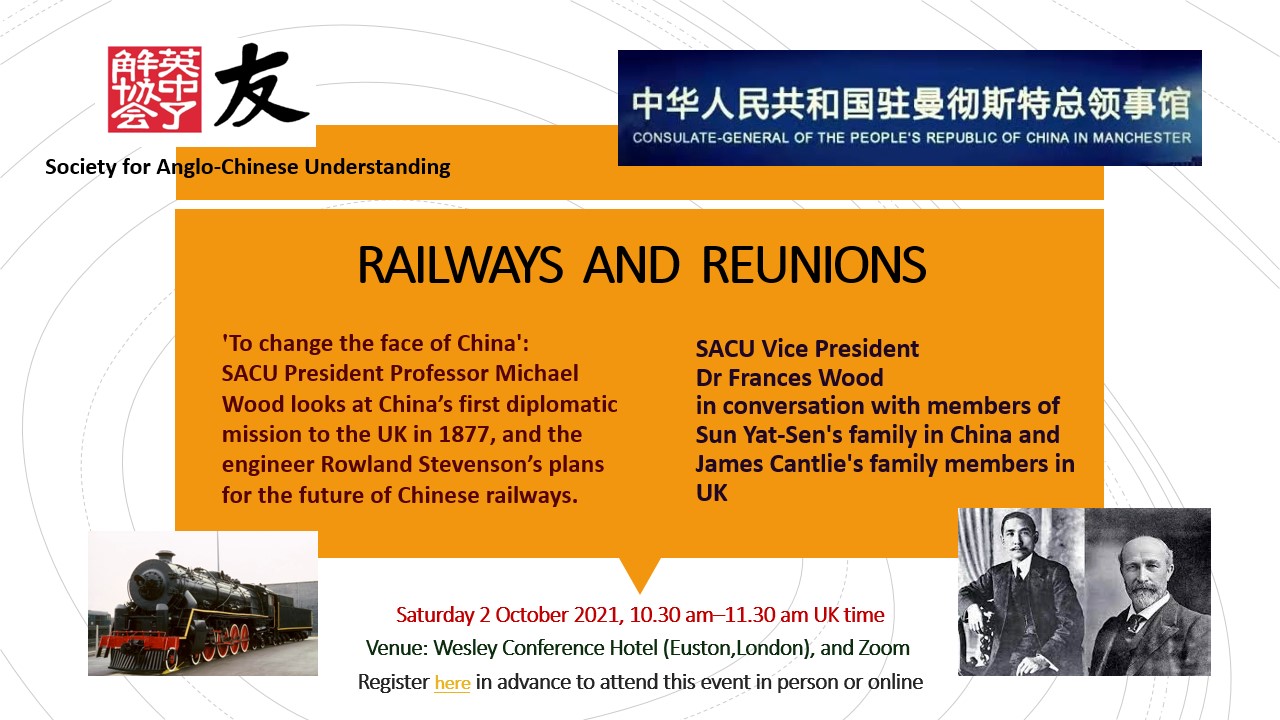 SACU’s AGM 2021 took place on Saturday 2nd October at the Wesley Conference Hotel, Euston Street, London. A new Council of 12 members was appointed and the meeting voted unanimously to convert SACU into a Charitable Incorporated Institution. Thanks to members who attended this ‘blended’ meeting either in-person or by Zoom.

“Railways and Reunions” took place as SACU’s public event before the AGM on Saturday 2nd October 2021. Consul General Zheng Xiyuan of the Manchester Chinese Consulate proposed this joint event to mark the 110th Anniversary of the Chinese Revolution. We brought together family members of Dr Sun Yat-sen and Sir James Cantlie who played a critical role in helping Dr Sun escape imprisonment by the Qing legation in London in 1896.

This was SACU’s first in-person event since 2019, presented as a ‘blended’ event with people attending both in the room and by Zoom, held in the morning because of the time difference and to accommodate the availability of Sun Yat-sen’s family in China. Several members of the Manchester Consulate and SACU Council collaborated to organise this highly successful event. The expert technical help provided by the Consulate was invaluable in linking attendees in the room and on Zoom with Madam Alexandra Sun in Guangdong, her son Justin Sun in Beijing, and Sir Hugh Cantlie, son of Kenneth Cantlie, with his son Charlie Cantlie in Oxford, and facilitated by SACU Vice President Dr Frances Wood.

We started with a video film made by the Manchester Consulate at the York Railway Museum which set the scene for our event. The museum houses a KF Class No.7 steam locomotive designed by Kenneth Cantlie and donated to the museum where it was restored and has been exhibited since 1983. Kenneth Cantlie was an expert railway engineer and the son of Dr James Cantlie who had taught the young Sun Yat-sen when he trained as a doctor in Hong Kong. Dr Sun recognised the worsening situation in China and proposed reforms to the Qing government in the early twentieth century but when they refused, Dr Sun started to think of revolution as the only way forward.

We then met Madam Alexandra Sun, granddaughter of Dr Sun, who showed us around the Sun family mansion, now a museum, in Zhongshan, Guangdong, built in 1892 when Dr Sun was still a student. Dr Sun Yat-sen became the provisional first President of the Republic in 1912 and later became Supervisor of Chinese railways. Kenneth Cantlie worked in China in 1930s, designing steam engines especially suited to the difficult terrain and available type of coal. So, the friendship between these two families has continued through the generations, and it was an honour for us to meet these distinguished guests.

“To Change the face of China”: SACU President Professor Michael Wood talked about the early development of the railways in China, at first built by foreign powers and not welcomed by the Chinese government. Guo Songtao was the first Chinese ambassador abroad, arriving in Britain in 1877. He realised China needed to understand foreign affairs and develop a proper foreign policy whilst establishing prosperity at home and railways were crucial to this. He had talks with the railway engineer Rowland Stevenson who drew up plans for the future of the Chinese railways. Guo recognised that China’s technology needed to be reformed along with a wider openness to ideas of modernity. Gradually, railways were laid, 9,000 km by 1911 by foreign concessions and the first railway by the Chinese in 1909 from Beijing to Inner Mongolia was engineered by Zhan Tianyou, now regarded as the father of China’s railways.

Prof Michael Wood referred to his films on Deng Xiaoping’s reforms and opening up, when Deng called for modernisation of Chinese technology. Michael’s films included one on developing the railways and he described the high-speed train journey of his film crew from Beijing to Guangzhou, travelling over 1,500 miles in 8 hours. He commented that, although the surge in high-speed railways has slowed in the last two years it is likely to pick up again. China’s railways are an amazing achievement, now the second biggest and most up to date in the world – and what would Zhan Tianyou make of this progress?

“China at High Speed”: At 6.00pm we streamed a lively and colourful film from the China National Tourist Office which concentrated on individual experiences to show how the network of high-speed trains across China is helping development.

“1921” film screening: SACU was a partner with Friends of Socialist China and other organisations to screen this critically acclaimed film about the formation of the Communist Party of China in Shanghai one hundred years ago.

The video recording of “Railways and Reunions” is available on SACU’s YouTube channel: